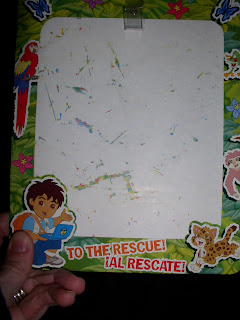 This is the toy that caused Ella's thermonuclear meltdown on Monday. Once she stopped asking if she could have it back, Ella started asking me to get it out of the trash and take a picture so that she'd have something to remember it by.
Finally, Wednesday night I decided that taking a picture was the least I could do since I had so obviously ruined her little life by throwing away a worn-out toy she hasn't played with in months. If any of our neighbors looked outside at about 9:30 pm, they would have seen me standing the rain, by the light of the open garage door, pulling bag after bag out of the trash looking for the one that had this thing in it. Of course, it was at the very bottom.
I found it, took a picture, snapped the little board in half, and threw it back in the trash, grumbling the whole time about how that child just doesn't understand what I'm willing to do to make her happy.
When I went inside, I showed Ella (who was still awake whimpering about the toy) the picture on the camera. She gave me the biggest smile, snuggled down in her covers, and went straight to sleep.
And she hasn't mentioned the toy since.
Posted by hokgardner at 12:50 PM

The things we do. Hope you're having a better day today, though.

I'm sure you appreciated the irony of it saying, "!Al Rescate!"