Why I went to the Capitol

Yesterday something amazing happened in Austin. Our current "governor" and his cronies tried to cram a piece of draconian legislation through the process during a special session. It was an omnibus bill, SB5, containing all the abortion restrictions that they hadn't been able to pass during the regular session, which ended in May. The number of votes needed to pass bills during special session is different than during regular, which means legislators love to try sneaky things.

Even though I live near Austin, a very, very liberal city, I still feel pretty disenfranchised. My state and national legislators are all right wing republicans who in no way, shape or form represent my political views. I write e-mails to them about things, but I know it doesn't do any good. If I get lucky, I get a form response two weeks later that has absolutely nothing to do with my issue. But I keep sending them, with this glimmer of hope that somewhere in the office, someone is keep tabs on the number of opposing voices they're hearing. Having worked in constituent relations for major elected officials, I know it's a dim hope.

SB5 was just one more item in the list of things I have felt powerless and voiceless about.

But then . . . Sunday night during testimony on the bill in front of the Texas House, something amazing happened. Individuals gathered to stage a citizens' filibuster. Testimony from people opposing the law went on for hours and hours. Folks camped out in the hallways of the Capitol through the night. Supporters from around the country started having food delivered to the people waiting to give their testimony.

The citizens' filibuster only slowed things down for a day, but that was enough for there to be a chance of a filibuster while the bill was up for a vote in the Texas Senate. And one senator, Wendy Davis, with the support of the rest of the Democratic delegation, announced her intent to stage a filibuster. The rules in the Texas Senate are incredibly strict. The speaker has to stay on topic the entire time, cannot sit down or lean against anything, is not allowed to eat or drink or use the restroom. Senator Davis was looking at a minimum of 13 hours on her feet talking nonstop.

Groups started putting out calls for people to submit testimony on how SB5 would have affected their lives, and Senator Davis's office was inundated with heartbreaking stories from women who had had abortions for one reason or another and who, if SB5 were enacted, wouldn't have had access.

On FB, I started seeing pictures from friends who were in the gallery to support Senator Davis. They wanted her to know that she wasn't alone during this ordeal. I really, really wanted to be one of those people there in support, but I didn't see a way for it to happen.

But then, while I was at climbing practice with Ella, I saw more posts on Twitter asking people to come reinforce the crowd in the Senate gallery through midnight. And that's when I decided I was going to go and I was going to take Ella with me.

In the car we did have a difficult discussion about what abortion is, exactly. I kept my tone neutral and only answered the questions she asked. I emphasized that I was upset because I'm tired of legislators, mostly male legislators, telling women what they can and cannot do with their bodies. I'm tired of being told that we are less than, that our opinions and feelings don't count. I'm just tired of it, and I wanted to stand up and say "No! This isn't right."

On the way to the Capitol, I envisioned a few hundred people milling around and texted Wendi Aarons to let her know we were on our way. What we found when we got there was beyond belief. 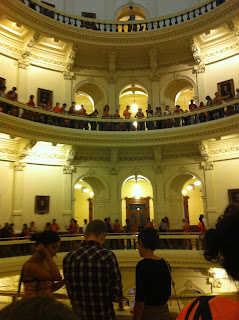 And here's the thing. No one, and I mean NO ONE, was complaining. Thousands of people standing in line, and there were no problems. No one argued about having to be in line, no one tried to cut or cheat. It was like the happiest, most positive party you could ever imagine.

Every once in a while a person would come through with a cooler and hand out bottles of water to anyone who wanted one. And then a bag of granola or trail mix would be passed down the line. People let strangers use their phone chargers and took pictures.

I still get weepy thinking about it.

After an hour of standing in line in which we managed to make it around the rotunda once, Ella and I gave up and went off to explore. I knew the odds of our making it into the gallery by midnight were slim, and I was just happy that we were there to witness the goings on.

When we got out of the line, it snaked down to the first floor, across the rotunda, out and back down one wing, to the front door and down the sidewalk. And again, there were no problems. Ella and I went up to the fourth floor just to take in the sight. 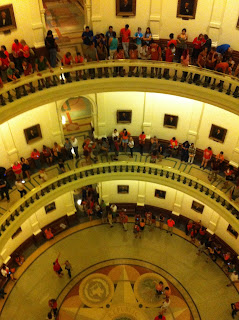 From there we went over to the Capitol Extension and found the auditoriums where CCTV had been set up so people could watch. Both were standing room only. People were yelling and cheering and legislators were popping in to thank everyone for being there. The crowd was men and women and families and people of all ages, and it was amazing. 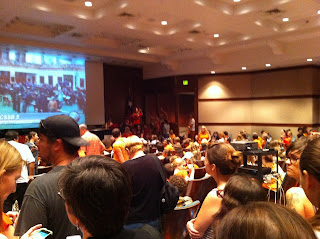 We sat on the floor of one auditorium for a while, only to have nothing happen. The president of the Senate, David Dewhurst, had called a point of order, and the legislators were debating the rules of a filibuster away from the microphones. Senator Davis was still not allowed to sit or lean or eat or drink while the debate was ongoing.

I decided to show Ella around the Capitol. I used to work in the complex and spent a lot of time wandering the halls. The view from the underground rotunda still gets me every time. That's the statue on the top of the Capitol poking up. 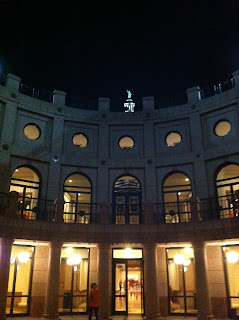 We were back in the main rotunda when word filtered through that Dewhurst had called a third point of order and ended the filibuster. The roar from the crowd was deafening. We stood there for half an hour, joining in. Ella did ask why people were cheering when the bill was going to go through after all. I explained that it was important to make noise and to make ourselves heard, to make sure the Democrats in the Senate chamber knew we were still out there.


Organizers finally got everyone quiet enough to announce that the Democrats were arguing the point of order and trying to stall for more time. As long as the session ended without a vote being taken by midnight, the bill would fail. So everyone just sat down and waited quietly. 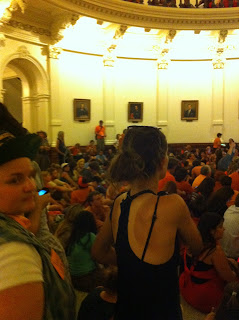 At this point we heard roars from outside the Capitol. Dewhurst had ordered that the doors be closed and locked and no one else allowed in. Hundreds of people on the steps were chanting "Let Us In!"

My phone was dying by now, and I my terror of crowds was starting to kick in, so Ella and I left the building and sat on the front steps for a while. We talked to friends, we talked to complete strangers. It was just amazing. I know I keep saying that. But it was. 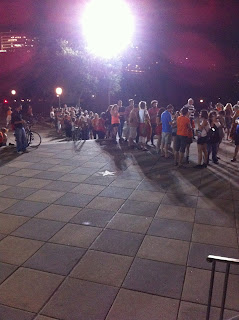 Ella desperately wanted to go back in the building, so we went around to the north entrance hoping the line for security would be shorter, but the doors were still locked and no one was being let in.

So we went home, intending to watch the live feed from the Senate floor. But I fell asleep. Whoops. I woke up at one and went online for updates and was stunned that the whole thing was still going on. I stayed up until just after three, when Dewhurst issued his snippy little statement about how an "unruly mob" had made it impossible to vote on the bill properly before the session ended.

Now this is a brief victory. There is absolutely nothing stopping "Governor" Perry from calling another special session and bringing the bill back up. In fact, he probably will make an announcement soon. But at least last night, we made our voices heard. We stood up with Senator Davis and said NO.

I'm beyond proud that I was there to do my tiny part. And I am glad that I was able to show Ella that people can stand up to injustice and have it make a difference, no matter how small.

There's now a petition afoot to draft Senator Davis to run for governor, and if she does, I will be campaigning for her.
Posted by hokgardner at 3:03 PM 8 comments: