I hate school projects. I hated them when I was in school, and I hate them now that my kids are having to do them. Ella has had multiple due in the past few weeks, and Lily had a big one due on Tuesday. With all of them, I took a very hands' off approach. My kids are probably the only ones at their school whose projects don't look like their parents helped.

Lily's project, which was about American Indian tribes in Texas, came with several options. She could have researched and cooked an authentic meal, made traditional clothing, written a story, built a diorama or researched and written an essay.

I, of course, voted for writing the essay. "It's the easiest! You just have to look up the facts and then write them all down neatly." She argued for doing a diorama, and I lost the fight.

This was one of those times when I was very glad that B and I have different strengths and skill sets. While I protested the paint and clay that was taking over my kitchen, he worked patiently with Lily to make sure her people were structurally sound and helped her research Tonkawa tattoos and clothing.

Still, my kitchen looked like this for three days. 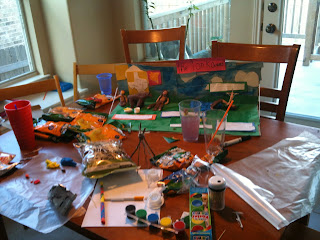 I'd make Lily clear off the table every night for dinner, but the mess kept coming back. 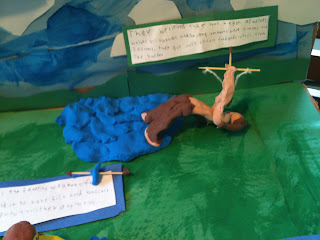 This Tonkawa had some structural problems. Either that or he's aiming at birds. The blue thing on a stick next to him is a fish that's been speared. 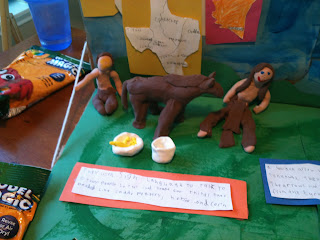 From the left we have, a faceless Tonkawa, a horse filled with toothpicks, and a very happy Tonkawa with the world's longest loin cloth. 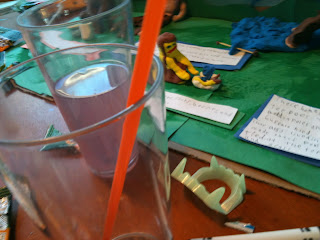 For some reason, glow-in-the-dark vampire teeth were an important part of the production. And behind them in the Tonkowa's Marge Simpson washing fish in a pot.

More things were added after I took these pictures. Ella helped Lily build a buffalo. I didn't know what was going on when I heard Ella say, "I stuck a toothpick in each eye and gave him a frontal lobotomy." The poor buffalo.

I was so relieved when I carefully delivered Lily and the project to school on Tuesday. The only damage was that the faceless Tonkawa lost his arm somewhere along the way.

Lily really did work very hard and do an excellent job on her diorama. But next time, I'm making her write the essay.
Posted by hokgardner at 11:29 AM 2 comments:

I've admitted in the past to having a UFO phobia. Fortunately, this particular little weirdness of mine doesn't affect my life on a daily basis, even if it does mean I will never, and I mean NEVER, visit Marfa. And I still haven't ever watched all of "Close Encounters."

I have other things I'm afraid of, like scorpions, but that's because they are in my house and can actually sting me. Then there's my fear of dentists, but that is well earned. Ask me sometime about the summer I spent $15,000 on my teeth.

But my one other big phobia is talking on the phone. Until today, I'd told exactly four people about this, and one of them is my husband.  Another is my phsrink, who kindly gave me his cell phone number so I could text him if I was having problems with my medications instead of calling him. I've never said anything because talking on the phone seems to be a really, really stupid thing to be this scared of.

If you call me, odds are, I'm not going to answer the phone. I think e-mail and text messages are the world's best inventions, along with the polio and smallpox vaccines, of course.

A lot of my phobia about talking on the phone comes from my social anxiety. When I'm on the phone, I can't pick up social cues like the eye-rolling and sighing that usually indicate I've talked way too much. And I worry all the time about talking too much.

This also means I don't call people very often, except for my mom and sister and childhood best friend. I figure they have to keep liking me even if I talk too much about something stupid.

And not being able to pick up the phone and call people has its drawbacks.

Like the friends I don't talk to ever because I'm afraid I'll annoy them by calling (yes, really). This includes people I've considered close friends for more than 15 years.

Like the calls to the insurance company, wheelchair supply place, and doctors' offices regarding Ella's surgery that I haven't made yet because all of those involve talking to, gasp, strangers.

Like the calls I haven't made to preschools yet because, again, that would involve talking to more strangers.

Like the panic attacks I have before each and every work-related conference call.

Like contacting Ella's school about her unexcused absences because talking to the school secretary, who is actually a very, very nice lady, scares me.

Like the playdates and sleepovers I haven't arranged for the kids because I'd have to talk to other moms on the phone.

Believe it or not, my college job was doing phone fundraising for the University of Florida Alumni Association. I spent three hours a night, three nights a week, calling absolute strangers on the phone and asking them to donate money. I was good at it, too.

Now, there's no way I could do that.

One friend sent an e-mail looking for volunteers to man a phone bank for President Obama's campaign. I really, really wanted to go. But even thinking about volunteering, much less actually going and making phone calls, sent my anxiety levels through the roof. So I didn't even reply to the e-mail.

Today, with B standing next to me for moral support, I actually called the insurance company about billing questions. When I finished talking to three very lovely and helpful staff members and hung up, B asked, "Was that so terrible?" It was. My palms were sweating and my hands were shaking, and it will likely be the last phone call I make for a few days.

So if you haven't heard from me, it's not because I don't love you or care about you. I'll be happy to send an e-mail or text. Just don't make me pick up the phone.
Posted by hokgardner at 2:39 PM 7 comments:

Hi. How are you? I'm still here. Barely. During the hot days of summer, I couldn't wait for school to start because I'd have so much more time to work and blog and surf the web for dog shamming pictures. HAHAHAHAHAHA

Between driving Ella to and from school because she can't ride the bus, and driving her to and from doctors' and PT appointments, and sick kids, and taking Lily to ballet class and auditions, and eleventy majillion birthdays, I barely have time to get real work done, let alone blog.

I know better than to think that the worst of the chaos is over. As soon as I let my guard down, whammo.

And now for something completely different.

Earlier this summer, after much research and polling of friends and agonizing, I bought a fancy, shmancy European vacuum cleaner, one that's not a Dyson. It's a Miele, which I have no idea how to pronounce. I think I spent more on it than I did my wedding dress.

I love this vacuum. It lets me vacuum stripes into the carpet. It doesn't leave any dog hair behind. I feel like I've really cleaned after I've used it. And its cord is long enough to let me vacuum the whole downstairs without having to unplug and replug.

Last weekend I was vacuuming away, sucking everything out from under the sofa, when the vacuum gave a big cough and stopped working. I poked and prodded it. I changed out the bag, just in case. I called B in for help. Nothing. The motor worked, but there was no suction.

So I called the local fancy vacuum dealership - Long's on S. Congress, if you're interested - and the guy said I could bring it in and that there would be a $20 diagnosis fee that would be applied to the total repair bill. I loaded the vacuum into the car and headed in to town, imagining the outrageous check I was going to have to write.

When we got to the store, the guy whisked the vacuum off into the back room, from where I heard lots of suction noises. Five minutes later, he walked out pushing my vacuum. I said, "Let me guess. There's nothing wrong with it."

The guy laughed and said, "Nope. Nothing wrong with it. But I did find this in the tube." 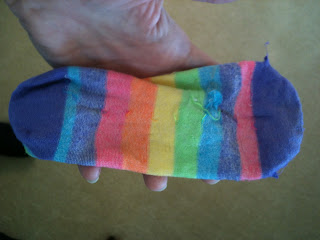 The nice vacuum cleaner guy didn't even charge me the diagnosis fee.

But it is reassuring that the vacuum cleaner is powerful enough to swallow a sock.
Posted by hokgardner at 11:58 AM 5 comments:

Two weeks ago, when I published a post about Ella's attempts to get a response from Neil deGrasse Tyson's office, I didn't really think I'd have much chance of success.

But then one of her uncles went on a tear and made it his mission from god to get some kind of answer. He posted links to the pieces on facebook and on some forums he frequents.

Several days later, I got this e-mail:

Dear Ella and Ms. Gardner:
I'm Jeffrey Simons, the Social Media Director for StarTalk Radio, the podcast Dr. Tyson hosts.
Our apologies for any delay in the response -- it is not intentional.
It’s our understanding that Elizabeth is on a long vacation, from which she has not yet returned.
I am quite aware of Ella's email, and was incredibly impressed by her, as we all were.
As soon as Elizabeth is back I’m sure she will be back in touch with you.
By the way, you can also give credit to her uncle, AB, for bringing this situation to our attention... it was his post in the TexasCHLforum that caught our attention.
Sincerely,
Jeffrey Simons
StarTalk Radio
Social Media Director
jeff@startalkradio.net


Holy cow! Now I'm not even going to ask why Uncle Ty was in a forum for concealed handgun licenses or what Mr. Simons was doing looking in one. I'm just going to assume the best of everybody.

Keep your fingers crossed that this really does work out.
Posted by hokgardner at 9:20 AM 6 comments: