What I did on my summer vacation, Part 1

So. . .  we've survived the summer, mostly. It's still stupidly hot. Yesterday afternoon I came up with the brilliant plan of going running while Campbell was at soccer practice. It had cooled off all the way to 96 degrees, so I figured I'd be fine. My run quickly turned into a walk and then into a slow shuffle with lots of stops in the shade. In related news, I'm an idiot.

Anyway. The kids are back at school. Ella is in 7th, Lily is in 5th, Campbell is in 1st, and Elizabeth is in preschool three mornings a week. They are all mostly happy to be back with their friends. Not so happy about the early wake-up calls, though.

I finally feel like I can sit down and catch my breath. Or, at the very least, I can go for more than five minutes without being asked to referee a "she started it first" argument.

It was a good summer.

Ella and I started it off with a trip to South Florida for a climbing comp. We flew into Ft. Lauderdale late on a Thursday night, and ended up not getting to the hotel until 1:00 am Friday. My plan had been to request a late check-out at the hotel, sleep in, and then play on the beach for a few hours. Then I saw the hotel. The place had the word resort in its name. I don't think that word means what they think it means.

Instead of sleeping late, I woke Ella up early, and we went out for breakfast at the beach. It was lovely. Honestly, I am happiest any place where I can see water and smell salt in the air. I could have sat on the restaurant's deck for hours. 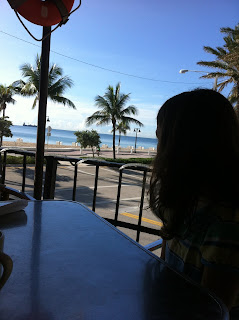 After breakfast, we went to the beach for an hour and then checked out of the dump. From there, we drove down A1A all the way to South Beach and then over to Key Biscayne. On a whim, I decided to stop at the Miami Seaquarium. I have a big philosophical objection to marine parks, but it disappeared when I watched Ella watching the dolphins. 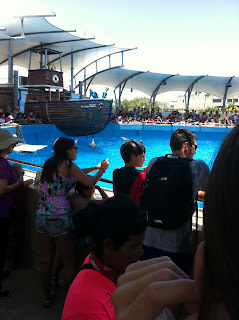 She was able to go eye to eye with dolphins and sea lions and otters. And she loved it. She also got to go on the rope course. She was so good at it that the guys running the place couldn't believe it was her first time. 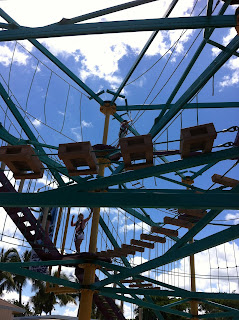 That's her, way at the top.

After the Seaquarium, we checked into the hotel where the rest of the team was staying. Ella let out an audible sigh of relief and said, "Oh thank goodness" when I opened the door to our room. It was new and spotless and I didn't have to throw my shoulder into the door to get it to close.

The comp itself was not great. In my humble opinion, it was poorly organized and run. I signed up to volunteer at some of the sessions and ended up unbelievably frustrated at how they were treating the volunteers. Plus, the AC had gone out the night before. So we were in a warehouse, in Miami, in June, with 200 people. By the end of the day on Saturday, it was a sauna. A friend of mine was going to come watch the comp on Sunday, but I waved her off. There was no need for her to sit in there and broil.

Ella climbed well considering that she missed 9 months due to injury and surgery. She took the disappointment of not making nationals a lot better than I did. I was actually quite proud of how she handled herself.

Once the comp was over on Sunday, she and I went down to the Keys. I lived in Florida from 1978 through 1994, and I had never once gone to the Keys. When you live within 10 minutes of Siesta Key Beach, there's not much need to go anywhere else. 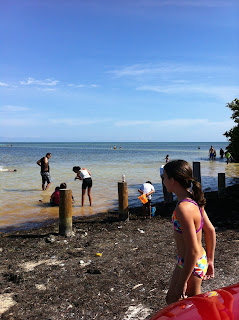 We stopped at a little pull-out area and floated around for about an hour. I really wanted to drive all the way to Key West, but I didn't want to drive back from Key West at 9:00 at night, so I resisted the temptation.

The next day we got up at o'dark early and flew back home to reality, which included three happy kids and one very relieved dog.

Next up, how I flew to Atlanta with four kids and didn't need to resort to getting drunk.
Posted by hokgardner at 7:17 PM 4 comments: