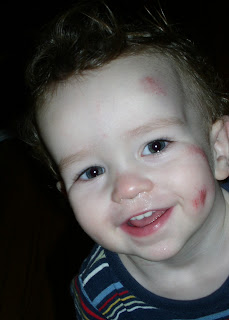 If you think Campbell looks bad, you should see the other kid.
Just kidding.
Actually, this picture doesn't really convey just how banged up his poor little face is. The bruise on his forehead is on top of a big lump. And the scrape near his eye goes almost to his ear.
It was one of those accidents that you don't see coming, but when it happens, it unfolds in agonizingly slow motion. We were at a birthday party last night, and Campbell was done in, so B was going to take him home while I stayed with the girls. B put Campbell in the back seat of his car to play around while I put the car seat. B went around to the other side of the car and opened the back door, not realizing Campbell was leaning on it. I lunged across the seat and yelled, as B lunged and managed to catch Campbell by the back of his shirt. Unfortunately, Campbell's face still hit the curb pretty hard. All three of us cried.
B watched Campbell for signs of a concussion for the rest of the evening while I stayed at the party and fretted. Having learned from our last head injury, I gave Campbell some advil when I got home to help stave off any potential headache.
Today Campbell seems no worse for the tumble, although my nerves are still shot. I've been putting tea tree ointment on his scrapes all day, which Campbell thinks is fun. But we did get a lot of strange looks from folks at the playground this afternoon, like they were wondering whether they should call CPS on me. But as my sister says, if that ever happens, all we'll need to do is let Campbell run around for five minutes and fall down.
Posted by hokgardner at 4:48 PM

Poor baby. My kids have had tumbles, too, but usually indoors, off chairs.

I'm sure his scratches will heal in no time.

He should have the slogan "takes a lickin' and keeps on tickin'."

Honestly, I have never seen a more accident prone kid, ever.