The hill I died on

Despite my worries about the rain and illness, yesterday morning actually went all right. Lily and Campbell both took really good naps, and Ella got invited to a neighbor's house even though I told the mom about the possibility of contagion. I got work and knitting done. Things looked good.


But it all went to hell in the afternoon.


The girls share a room and sleep in bunk beds. They keep a lot of their toys in a trundle that rolls under the bottom bunk. When I first got the trundle, I organized all their toys in nicely labelled clear plastic bins - it was a fit of pregnancy-induced nesting. The system lasted all of a week before falling apart as the girls just chunked toys in wherever. I've cleaned it up a few times since then, but lately it had gotten really bad and was getting on my nerves.


When Ella got home from the neighbors' house, I offered her a buck to clean out the trundle and sort things back into their bins. She worked on it for about 15 minutes before declaring herself bored and forfeiting the dollar.


I went in to take a look and found this. 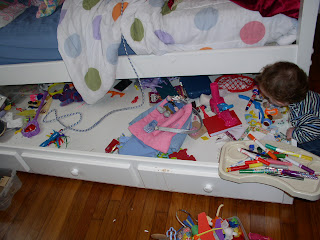 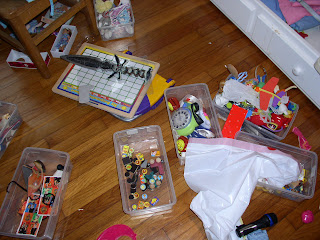 I decided I couldn't possibly just put all the bins back in the trundle and tuck it away; half the job was already done. So I grabbed a trash bag and more bins and started to work while the girls were busy watching PBS Kids. I figured I was home free. But then Ella wandered in and saw what I was up to and started crying about how I was throwing away her favorite toys that she loved so much. I tried to reassure her that I wasn't throwing out any toys that weren't broken or ruined, but she wasn't buying it. And, honestly, I didn't throw out any of their treasured stuff, just the flotsam and jetsam of broken crayons, worn-out markers, dried up paint, and scraps of paper and other trash.

But Ella had spotted, through the bag, this Diego notepad she had bought at her school's book fair last spring. It has this special coating on it, that when you paint on it with water, changes colors. The coating wore off long ago, and the special paint brush has long since disappeared. Even though Ella hasn't played with the thing in months, she decided then and there that it was her most special toy ever because it helped her remember her first-ever school book fair.

I told her to leave the bedroom and let me finish. She went back in the living room but came back in her room every few minutes sobbing uncontrolably, which then turned into shrieking at the top of her lungs loud enough that it scared Campbell. Lily joined in with the crying for a few minutes, but after I reassured her that I wasn't throwing away her splinter or her lovies, she was mostly fine.

When I tried to take the trash bag out to the garbage, Ella clung to it with her whole body, sobbing and wailing as though I were throwing out everything she owned.

Now I know that at this point I could have simply taken the Diego thing out of the bag and given it to her, but I felt like that would have been rewarding her rather terrible behavior. She was screaming "You may not do this to me! You are not allowed to do this! I'm telling Dada on you! You are the worst mother in history!" And really, there need to be consequences. So I detached her from the bag and took it out.

When I came back in I sent Lily to Campbell's room and Ella to mine so that we could all take a breather and cool off. Ella brought me out a long piece of toilet paper on which she had written, "I will give you every dime and pennie I have to not trow away my toys." I went in my room to try to talk her down and explain why I had thrown things away, but all she did was yell and scream. I walked out, telling her that she had to stay in my room until daddy got home.

Lily had calmed down enough that I let her out of Campbell's room and enlisted her help in finishing sorting toys into bins and putting them into the trundle, which she did quite cheerfully, chattering the whole time about this, that and the other. Why is it that when one child has lost her freaking mind, the other is on her absolute best behavior?

B arrived home to have Ella come out of the room to tell on me. He just nodded and sent her back in. B, Lily, Campbell and I all ate dinner together (which I would later realize was a big mistake), and then I took Lily and Campbell off to take a bath in my bathroom. I checked on Ella, who had retreated under my bed, and found her like this. 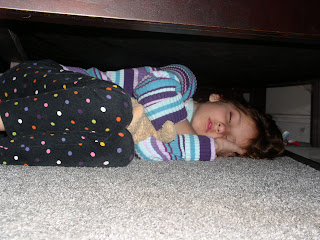 We left her sleeping under our bed and got the little kids bathed and tucked in to their beds. Ella staggered out a while later, and under duress, apologized to me for her behavior. B gave her a plate of dinner and sent her off to bed when she had finished. But once she was in bed, the waterworks started again.

She went on and on about how maybe the toys weren't really broken and how Thursday, which is garbage day, was going to be the saddest day of her life because then she would never see her toys again.

B lost his patience at this point and started yelling at me about how I just had to pick this hill to die on and how I'd better clean up my mess. That didn't help my mood. I was already feeling like the worst mom ever, and to have him gang up on me didn't help. I gave Ella a final warning and stomped off to bed to read.

The fun continued at 9:00 when Lily threw up all over her bed, and the wall, and the headboard, and her stuffed animals, and Ella continued to hector me about the toys while I was cleaning everything up. She started in again at 3:00 am when I was up with Lily, who was throwing up more. And the first words out of Ella's mouth when she woke up this morning were about the toys. She wants me to dig the toys out of the trash and take pictures of them to help her remember them.

This morning I'm feeling horribly guilty about it all. I shouldn't have thrown stuff away while the girls were around; I know how they get about their stuff, even if it is just garbage. But, again, I just couldn't bear to put the trundle back in half cleaned. And perhaps I should have given the dang toy back, but I really felt it would be rewarding bad behavior. Besides, Ella really needs to learn that you can't keep every little thing. She'd keep every Tootsie-Pop and Hershey's Kiss wrapper if I let her.

So this morning I'm nursing my mug of tea, pretending it's coffee, and feeling like the meanest mom in history, even though I know I'm not. This one incident alone won't send Ella into therapy when she's older.

Posted by hokgardner at 7:22 AM

I hate toys. But definitely, yeah. Never "clean" when they're around, ha ha. (Though this is perhaps why my kids think "someone" will clean up after them...)

It is a full moon today (or yesterday...) That may sound crazy but I have an 11 year old daughter whose is the sweetest kid to be around most of the time except when it is a full moon. I have talked with lots of people about this and you would be surprised at how common the lunar effect is.

Ella was born on a full moon, so maybe she is susceptible to its pull.

I've been having so many days like this lately--ones where I seem to be damned if I do or damned if I don't. It's horrible and I am guilt ridden.

And they aren't even close to being teenagers yet. We are in such big trouble.

remember when mom and dad did this to you? except you were twice ella's age.

Oy, I feel you. Oh, so many days like this. You aren't a bad mom. You wouldn't even be a bad mom even if you HAD thrown out all their toys. Just a good mom having an off moment. Hope the rest of the day was better.