This is why we can't have anything nice

Yesterday afternoon I noticed Elizabeth sitting on the floor concentrating hard on an art project. I did a a double take and screamed in horror.

Her art project was my floor. 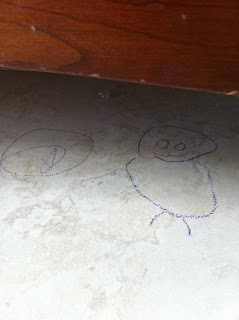 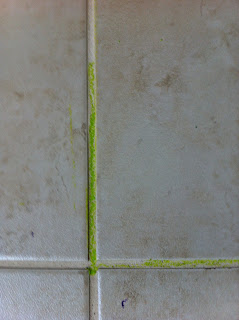 When I sent her to her room, she had the nerve to look surprised.
Posted by hokgardner at 11:07 AM 6 comments:

This school year has been a tough one around chez hok health wise.

Thanks to knee surgery and strep, Ella missed so much school in the fall that we got threatening letters from the school district telling us she'd have to repeat 6th grade. I appealed to the principal and the attendance committee, pointing out that we had informed the school in advance of her knee surgery and had worked with her teachers to make sure she stayed current on her work. As for the strep, we had a note from our doctor saying she was sick and not allowed to go to school. Oh yeah, and she's a straight-A student.

A week later we got a letter from the principal informing us that they had wiped all of Ella's absences from her record and everything was fine.

So when I got a letter from Lily's school about her absences, I figured we'd go through the same process. Lily has been sick a lot this school year, and she has missed a lot of days as a result. But I've kept in touch with her teacher, and she has stayed current on her work. She's also a straight-A student.

All this is to say that when my kids stay home from school it's with my permission and because they are sick. They aren't skipping school to hang out behind the 7-11 and smoke. When I get a recorded message from the school informing me of their absence, it's never a surprise.

I spoke with the assistant principal at Lily's school about appealing the attendance committee's decision to deny her credit for the school year, and I explained that she really had been ill. I also pointed out that she hasn't fallen behind in her classwork. The assistant principal said she would present my comments to the attendance committee and inform me in writing of their decision.

Frustratingly, their decision was to make Lily and one of her parents (me) attend credit recovery class for 6 mornings. This means she and I have to be at school by 7:05 and then have to sit in the library doing busy work until 7:40. Lily finished her entire packet of worksheets on her first morning, so today she and I both just sat and read.

The result is that for the next two weeks, Lily and I will hang out in the library being bored, and for the rest of school year, I will be sending Lily to school no matter how high a fever she has or how much she's barfing. I am going to be the mom who sends her sick kid to school to infect everyone else. Yay me. But that's apparently what the attendance committee wants.