Death of a doll

When my mother was here back in September, she and Ella had a little tea party with Ella's tea set. Lily, as she is wont to do, started sobbing because she didn't have a tea set of her own and she really, really wanted a tea set of her own in a basket with a doll just like Ella has. Mom, as she is wont to do, tried to talk me into going shopping immediately for a tea set. She just can't bear it when Lily cries. I calmed Lily down and talked mom out of an immediate shopping trip, but mom was bound and determined to get Lily a tea set.
I went shopping one day at the Tea Embassy and found a cute little tea set in a basket with a doll. I called mom to see if she wanted me to get it. Of course, she did. She gave Lily the tea set for Christmas, and mom and Lily had many, many tea parties during the week my parents were here.
Unfortunately, about two weeks after Christmas, Lily came out of her room sobbing, holding her tea party doll, who had broken. Half the doll's face broke off, leaving scary googly eyes, and one arm and one leg had snapped off. I thought Lily was crying because of the scary eyeballs, but instead she was just devastated by the broken doll. We put the doll aside and told Lily we'd try to fix it or get a new one.
When mom came to town for Lily's birthday, she insisted on going to the Tea Embassy to see if they had any replacement dolls. They didn't have any exactly like the one that broke, but they did have a ballerina doll, so we got that. Lily was just thrilled, and she put the doll in the place of honor on the big table in the living room.
The next day, my mom was reaching for something on the table and knocked the doll to the floor. She and I just froze in fear, sure that the doll was in a million pieces. Miraculously, the doll survived the fall, but we moved her to a more secure location.
Ballerina doll wasn't so lucky last night. Ella and Lily were playing in their room when I heard Lily start wailing. She came out holding the doll's body in one hand and the doll's head in the other. I really, really wanted to laugh because it is just unbelievable what bad luck we're having with these little dolls, but I couldn't because Lily was so sad.
We put the doll up, and I've promised Lily that I'll find a doll repair shop to put the doll's head back on. I think I need to buy a dozen of these #*&#@ dolls to have as back-ups the next time one breaks, because it's only a matter of time. 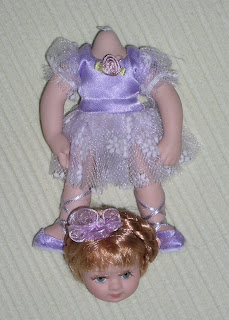 I like ballerina doll's head at her feet = that's a feat.

Oh, no. Oh, oh no. I HATE when a beloved toy is broken. Hate it. I hope that you find something workable, preferably something more durable.

How did the trip to the dentist go?

I think maybe you guys need to go whole hog and get the American Girl ones that you can send in to their hospital for repairs... heh heh heh.