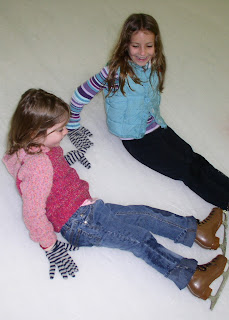 The girls went to an ice skating birthday party on Monday and had the times of their lives. One of our local malls, which is soon going to be demolished to make way for the largest Mega Wallmart in the state, has an ice skating rink.

Taking the girls skating has been something I've meant to do for a long time, but the opportunity never really presented itself. I wasn't sure if I'd have to hold on to both of them at the same time, and then there was the question of what to do with Campbell while we skated. On Monday, though, the stars aligned. My mom was still in town, so she came with us and wrangled Campbell, while I skated with the girls.

I was amazed at how well they caught on and how quickly. Ella held my hand for about 5 minutes and then took off on her own with some of her friends. Lily held my hand for longer, but after about 20 minutes she'd let go and skate on her own for a bit. Both of them fell a few times - Lily took some hard tumbles - but they kept at it. I was so proud of their stick-to-it-ness.

The girls had so much fun that they burst into tears when it was time to leave to take my mom to the airport. I managed to calm them down by promising a return trip sometime soon. Of course, they've been asking ever since when we can go. Ella is even asking to have her birthday party there. And she wants skating lessons just like one of her friends. I think we may have started down a dangerous path.

One other dad and I were the only parents skating. He asked if I had learned to skate when I was a child and living up north. Oddly enough, I didn't learn to skate until we lived in Florida; there was a mall near my grandparents' house in Clearwater that had a skating rink. When we visited my grandparents, my sister and I would beg for a side trip to the mall for skating. Of course, my sister has some pod-child memory of how I swore I'd never skate again after seeing how much better she was at it that I. As if . . .

Posted by hokgardner at 9:44 AM

The one and only time I have ever ice skated was at Countryside Mall in Clearwater, FL. I fell and wrenched my knee so badly that I never wanted to try it again. Glad it went better for your girls!

i asked mom, and she confirmed it. you should ask her too, so you don't think i'm making this up.