It's hard to believe it's been five years already, and Lily has changed from this . . . 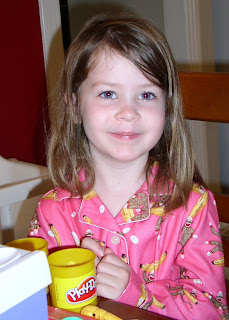 She's gone from being my roly-poly, blue-eyed baby, to being my big five-year-old girl. She seems to have shot up and leaned out almost over night. Her legs are now almost as long as Ella's are. Lily has also turned into a very determined little girl - keeping at things until she gets them right - like riding her bike or ice skating. She also loves dancing, and she twirls and leaps and spins through her day. Lily is also quite the little commedienne, but I don't know that she knows she's funny. She just has a way of saying things that cracks us all up. And unlike Ella, Lily still loves to snuggle in my lap on the sofa, and at my desk, and in my bed, and on the floor.

We had her party yesterday, and if Lily had been any more excited about it, her head would have exploded. We had a bike parade party up at the neighborhood elementary school. I set up the party on a few picnic tables and let the kids loose on the sidewalks and paths with their bikes. Based on the noise level, they loved every minute of it. There was even a playground for those who didn't want to ride their bikes. Everyone decorated their bikes with flags and balloons and beads, and everyone got a compass so they wouldn't get lost.

The best part of it all was that Lily was able to invite all of her friends since space wasn't an issue, and my house didn't get wrecked from having 20 kids plus their parents crowding in.

When Ella turned five, I dropped her off at preschool and drove home in tears. I didn't get the least bit misty about Lily's big birthday, but I have a feeling I'll sob when she goes off to kindergarten. I can still think of her as my baby girl even though she's five, but it'll be harder to still think of her that way when she's off at school. I'll have to come to grips with her growing up.

Great birthday party idea. It sounds sooo much better than the Pump It Up insanity we had in November.

Oh, happy, happy - she's so darned cute! Maybe SHE could be president. (Though personally, I hope we don't have to wait that long for a woman...)