A tale of two teeth

We've reached a weird sort of stasis around here on the tooth front.

Lily lost one of her top front teeth this past weekend, and it's amazing how different one missing tooth makes her look. I teared up when she grinned at me the next morning because her smile - her real smile, not this goofy one - is so different. She also has a funny lisp going on that cracks us up. We've taken to calling her the Toothless Wonder, which makes her giggle. 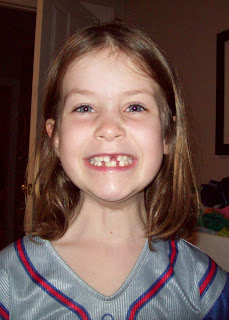 And just as Lily lost one tooth, Elizabeth got another. A second tooth has poked through on the bottom, bringing her grand total up to three - two on the bottom, one on the top. You can barely see the new tooth next to her other one, so she still looks a lot like a cute little pumpkin. 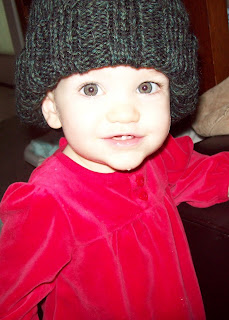 The hat she's wearing is one I just finished knitting for B. I popped it on her head and told her to take it to daddy. Instead, she wore it all afternoon. The little nut won't wear hats that are custom-made just for her, but she'll protest if I take off one that is so big it falls over her eyes.
Posted by hokgardner at 6:44 PM

As long as the old folks keep their choppers in then the transient teeth are very cute.

Very cute hat!
Funny about the teeth. My 5 year old can't wait to lose more of his.