Since I think I am going to make a run at completing Nablopomo, I'm going stretch out my Halloween posts into a few days, just in case I run out of things to write about or something.

Last year, Campbell was not at all interested in Halloween. After stopping at a few houses, he came home with me and handed out candy, provided the trick-or-treaters weren't wearing masks. If they were, he retreated behind my legs and closed his eyes until I gave him the all-clear.

This year was a different story, however. Campbell LOVED Halloween. I took this picture as Campbell walked away from his third house, and it was the moment that he made the connection between saying "trick-or-treat" and getting candy. He looked at me and said, "Mommom, the peoples gave me candy!" From that point on, there was no holding him back. 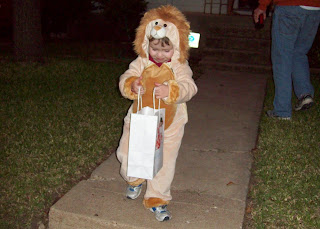 At another house, the couple handing out the candy complimented Campbell on his costume. When he got back to the sidewalk, where I was waiting, he said, "Mommom, the people really like me!" The other parents with us dubbed him Sally Field for that one.

He and I, with Elizabeth in tow, did two blocks before heading for home. After that, Campbell handed out candy without any fear of kids in masks. But he did correct their manners. As one little boy walked away, Campbell shouted, "You asposed to say 'Good-bye!'" 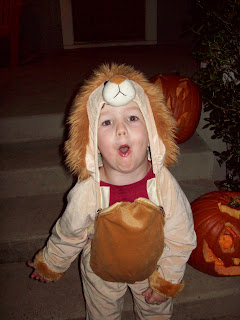 And is it only Campbell, or do all three-year-old boys have a permanent smear of schmutz across their face? His seems to be made up of snot, milk and peanut butter, and it sticks there no matter how often I wipe his face.

Campbell loved Halloween so much that he woke up Sunday morning and asked when we were going trick-or-treating again. He didn't like it when we told him the holiday was over. He also really wanted to wear his costume to school today. Since it was on loan from a friend, I vetoed that request.

He does make an adorable lion.

And yes, all 3 yr old boys have dirty faces. It lasts for at least 2-3 more years.

And yes, the constant face schmutz is part of boy-dom. I finally held my son down and got a piece of PB that has been under his right eye for weeks. repeated face washings didn't get it off, it required a fingernail scrape. he acted like I was trying to remove his eye!!

Cute lion.
What a difference a year makes. My kids didn't want to hold their bags last year. They were too heavy. This year they weren't going to give those up!

That is an adorable costume. And my face was all smeared with chocolate on halloween too.

"Mommom, the peoples gave me candy!" - Campbell is too funny. Did he want to go inside "the peoples" homes? As soon as the door would open, Sam would waltz inside and then say "trick or treat".

And I'm very excited about Nablopomo - you can do it!

What a cutie!!! Muffin wanted to wear her costume to school too - but the hoop in the skirt would be a bit much to deal with, don't you think? :)