Ever since Lily was about three months old, we've said that she could actually be my sister's child. There is a strong resemblance between the two - Lily has the same big blue eyes, fair skin and high forehead that my sister has. She also has the same ulta-fine slippery hair that refuses to stay braided no matter how much my mom yells at me about S's messy braids. They are both fairly similar in personality. My sister, when she was Lily's age, had some (ahem) drama queen tendencies, just like Lily, who can cry on cue.

When S was about 5, she became obsessed with "The Wizard of Oz," specifically Dorothy. S wore a plaid dress and always wanted her hair in braids (see above complaint about her hair). She also carried a basket with a little stuffed dog named Toto.

As S got older, she outgrew the Dorothy obsession, but that didn't mean the rest of the family did. For her 21st birthday, mom gave her a Madame Alexander Dorothy doll, and one year for Christmas I gave her a talking Dorothy Barbie.

But now Lily has taken up the obsession and is carrying on the torch for her aunt. S gave Lily a pair of super fancy sparkly red shoes for Christmas that Lily cherishes, and she has two stuffed dogs named Dorothy and Toto. When we started discussing Halloween costumes, Lily asked to be Dorothy. I sent out an e-mail to several friends asking if any had a Dorothy-esque dress that Lily could borrow, and a friend had a great one. Then I found Lily an official Dorothy wig at Walmart that completed the look.

And here she is, in all her Dorothy glory, except I didn't manage to get the shoes in the picture. 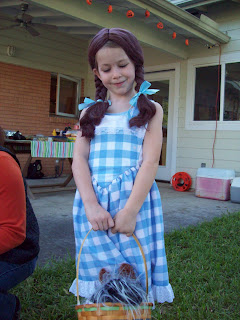 And my sister is officially jealous of Lily's shoes and wig. She's going to get Lily a Dorothy dress for Christmas. Shhhh - don't tell her.

Posted by hokgardner at 7:18 PM

Very cute indeed. I can't believe the trouble you guys go to for Halloween. . definitely a fun time for the kidlets.

So cute! My sister used to love the Wizard of Oz too. She watched it over and over again until everyone in the house was so sick of it!

Love it! She looks so sweet!

Adorably beyond cute!! And I love how she's following in Auntie's steps.

I had that too-slippery hair too. Ugh. Bane of my existence, still.