Missing the elephant for the trees

Once a year or so, I get a wild hair and turn into Cruise Director Julie and decide to organize different outings for the kids. And me being me, I invite lots of people to come along thinking it will make things more fun. I'm a "the more the merrier" kind of person.

I turned into Cruise Director Julie again this week, organizing an outing to the San Antonio Zoo on Tuesday since the kids are on spring break. I invited a bunch of other moms and their kids. Two other moms, LR and LE joined us, plus their kids, and we took one of Ella's classmates with us. So that made for 3 moms and 9 kids total. That's a lot of noses to keep track of.

Part of the reason I wanted to take the kids to the zoo was that I thought Campbell would really love seeing all the animals. Turns out, not so much. He liked the monkeys, standing in front of their enclosure laughing hysterically and asking to go in with them. And I think he liked the hippos and the leopards, but that was about it. He was supremely uninterested in any of the other animals. 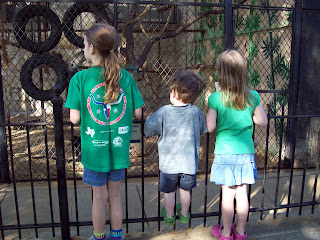 Here he is with the girls watching the gibbons, who were playing tag and making quite a racket. Campbell laughed and laughed and yelled, "Wait me! Wait me!" at them. He didn't want to stop watching to go find other animals. 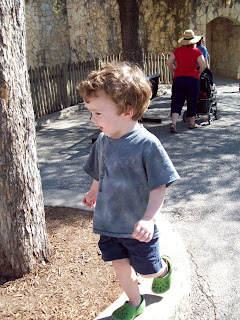 Once we left the gibbons, Campbell spent most of his time running around. While we were all marveling at the lions, the kangaroos, the hyenas, and the tiger, Campbell ran around this tree about a zillion times, cackling all the while. 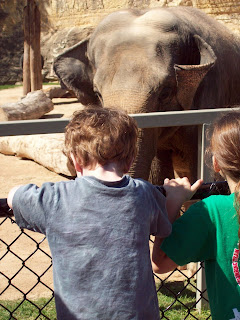 We spent the longest in front of the elephant enclosure. We happened to get there just in time for the zoo keeper's presentation, and we had an excellent spot to watch. As you can see, we were maybe 15 feet from Lucky the elephant. Campbell could have cared less. While the other kids were lined up along the fence, hanging on the zoo keeper's every word, Campbell entertained himself by climbing up and down the fence and, when he got tired of that, by sitting in the stroller eating cookies.

I don't think he even noticed the 7,000 pound elephant right in front of him. I kept pointing to the elephant and saying things like, "Look at his trunk, Campbell. Oh look, he's lifting his feet." But Campbell just kept on climbing the fence and eating cookies.

We left the zoo just as it was getting hot and crowded, and just as the kids were beginning to melt. I think everyone had fun, even if Campbell didn't notice the animals.
Posted by hokgardner at 7:56 PM

I LOVE the picture of Campbell running around the tree - that's so what Nemo would do, too. We haven't tried the zoo with our crew lately, we're about due for a trip. Maybe this weekend, the weather should be glorious.