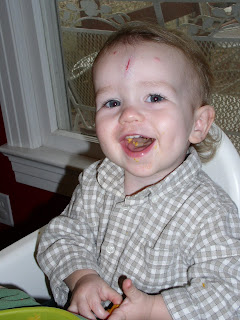 Here's Campbell shortly after we got home from the ER. He was starving by the time we were finished, so he was thrilled with his food. His good mood quickly faded, though, and he turned pretty cranky. His poor little head had to have hurt. I ran this morning with a friend who is a surgeon, and she recommended keeping him on Tylenol for the rest of the day for the pain and swelling. I think I'll follow her advice. The bruise, however, isn't nearly as bad today as I thought it would be. The two other marks on his forehead are mosquito bites. His head is just a mess. 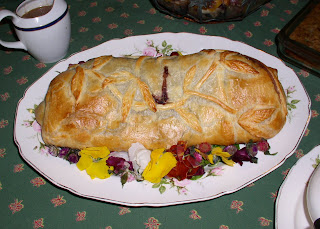 B loves to cook, but only when he can show off . I really don't care much about food - it's a means to an end for me. But B loves good food, and he still gets misty when he talks about a meal we had in Corpus 8 years ago. So he's in his element at Thanksgiving when he has an appreciative audience. This year he made Beef Wellington, which was a big hit. The dish involved his starting the process the night before, reducing 8 cups of beef stock to two cups and making something called duxcelles. B also made steamed veggies and bread-crumb stuffing (down here in Texas, people eat something called cornbread dressing, which just isn't the same). I made two pies, both of which were devoured.

After several questions, I'm adding this - we did have a turkey and all the traditional Thanksgiving casseroles and potatoes. There was so much food that everyone left with a plate of goodies to eat later.

Now I just need to finish cleaning up and putting the house back together again. And laundry - there's always laundry.
Posted by hokgardner at 9:30 AM

You poor people - you still have mosquitoes this time of year? Barb may not mind Long Island after all.

And, where's the turkey? Are you trying to tell me that that average size entree in the picture plus 2 pies plus some stuffing was enough to feed all those people? I mean, I know I always make waaay too much food; but did you draw straws to eat, or what?

Yummy! I've actually made that exact dish, and it was fabulous. I imagine your guests would have loved it!

Poor baby boy - that's quite a gash. Hope he's feeling better now (I'm just catching up on all your posts, so maybe there'll be an update later on...).

Hope you had a good weekend.