What the f#*$ were you thinking? 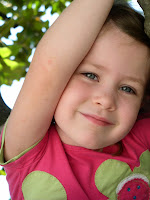 That's what I wanted to ask Lily today - several times. Except I wouldn't have used silly symbols, I would have used the bleepable word. I don't know what got into her today - the excitement of starting in a new classroom at preschool? The sheer exhaustion left from a busy trip to the beach? Whatever it was, she was in rare form.

I turned my back on her this afternoon to leave the room, and she pegged me, from two feet away, in the center of my back with a hard rubber ball. I was so shocked that it took a minute to register what had happened. I whipped around and grabbed the ball, sputtering "What made you think that was a good thing to do???" After the fact, I was proud that I hadn't dropped the f-bomb, since that was my first instinct. She shrugged and asked for the ball back, breaking into quite fake tears when I told her I was putting it in time out.
Then, after dinner, she came dancing and twirling back into the kitchen and slapped Campbell, who was still in his high chair, upside the back of his head. He was so surprised that his jaw dropped and food fell out of his mouth. Again, I refrained from cursing and sent Lily to time out. Ella, Campbell and I were treated to 12 courses of "Time out is so boring. Time out is no fun" until I reminded Lily that I couldn't start the time-out timer until she was quiet.
Honestly, sometimes I don't know how someone with such a sweet little face and such huge blue eyes can be such a pill. We used to call her the "Angel Baby," but it seems the Angel Baby has left the building.
Posted by hokgardner at 8:06 PM