That's me today, the idiot saying "Wha?" I think my fall may have shaken my brains lose. Other possibilities for my brain deadness include the 9 kids I had in my kitchen this morning, the buzzing feeling I have as a result of my asthma inhaler and iced tea, and the plastic fumes I've been breathing all day.
Thanks to Barb, I decided I'd let the girls do Perler bead projects this morning. It turned into a huge group effort thanks to my willingness to have every kid on the block come play. First, Lisa E asked if I could watch Walter while she went to a meeting at his school. Of course I said yes. Walt's easy to have at the house; he and Lily, despite the age difference, love, love, love each other. Once I knew Walter was coming over, I invited Matilda to join us for a morning of arts and crafts. Then Lisa R called to ask if Luke and Molly could hang out for a while so she and Russell could go to a meeting. "What the heck," I said. "The more the merrier." Fortunately Heidi hung around and helped supervise, so it wasn't me against all the kids.
Before everyone arrived, the girls and I went to Hobby Lobby and bought 10,500 beads. Ella was very impressed with that high a number. The amazing thing was how involved in the projects the kids got. Each made several "things," and the girls were still at it with the sitter when I got home from a few hours away from the house. Here's our collection with Lily's head for perspective. 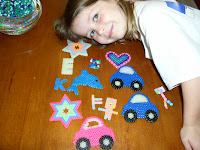 At dinner, my dementia got much worse. I actually told Lily to turn off the table and come to the TV. The girls just stared. Then I told Lily to eat more of her corn, even though she had finished it and I really wanted her to eat her chicken. There are other examples of mangled sentences that I can't even remember. B will confirm that I was a mess. The finale was realizing, just as everyone finished their meals and cleared their plates, that the bread was still in the oven. Big sigh.

I'm hopeful that once everyone is in bed I'll be able to unscramble my brains and get a good night's sleep. Maybe by then my whole body won't hurt from all my injuries. I went on Ella and Lily's theory that band-aids make you feel better and bought a new box of SpongeBob bandages at the store. So far they're not working. The cuts on my knees still hurt. I took pictures of my wounds, but they didn't come out well, so I'll spare everyone the scary sight.

Posted by hokgardner at 6:19 PM

I find that when I am sleep deprived, my stock of nouns gets so depleted that all I can do is point and grunt. And I get really clumsy. I'm not saying this is at work here but I am just...um...saying. --Barb

Sounds like a case of Mommy Brain. Are you sure you're not pregnant again? :)

I'm suffering from it too and am starting to accept the fact that I will be in this fog until the kid(s) are grown and out of the house. I'm relying too much on Sudoku puzzles to try and keep my brain sharp. Pfft!