A day of great bravery

Bravery of the little kid kind, that is.

We spent yesterday at the lake with friends, which was wonderful, as always. I love watching all the kids floating around in the water on their noodles, screeching every time a boat makes huge waves for them.

Several notable things happened yesterday, though, that made it particularly memorable. 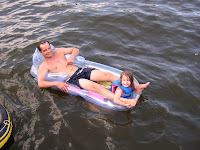 First, Lily, who isn't the biggest fan of the water, decided that she loved being in the lake. It started out when she agreed to let me swim her over to the big raft that's anchored off the dock. I grabbed a noodle and we paddled over to the raft together, but there was a line of kids waiting to clambor on, so we floated around for a while. She had a death grip on me and the noodle, but she was out there, floating around, without screaming her head off. She just got braver from there. I looked up at one point to see her floating around in Daniel's little inflatable boat with Jean at the helm. Later, she was out on a raft with Granddaddy. Then she discovered that she could hold onto the raft Brandon was lounging on and make it move by kicking. By the end of the day we had to drag her out of the water. She was crying that she wanted to swim some more. Such a change from last time we were at the lake and she wouldn't even get in the water.

Molly had a similar day. Usually she is content to hang out in the hammock with Lily or splash in Campbell's little pool on the dock. But yesterday she floated around in the water on a raft with her mom. It was so cool to see both her and Lily make such a giant leap in their comfort with the water.

Finally, Luke surprised the heck out of us all. Back in June he started copying Ella's giant leaps out to the floating raft - about 4 feet from the dock. Lisa was stunned that he had attempted it - he's not really a risk taker. Now he jumps to the raft without even thinking about it. A few weeks after that, he worked his way up to jumping off the diving board without someone below to catch him. Lisa and I were talking about whether Luke would ever follow Ella's example in jumping off the roof of the dock. Lisa just didn't think he would. But towards the end of the day, I looked up to see Luke and Ella up on the roof. Ella counted to three and jumped. Luke hesitated for a moment and then went for it. Lisa was helping Molly with something and missed the great event. Fortunately, Luke gave a repeat performance.

I am so proud of all the kids for the progress they're making at the lake, but especially these three yesterday. We'll have a whole little tribe of water rats by the time the summer is over.
Posted by hokgardner at 9:54 AM