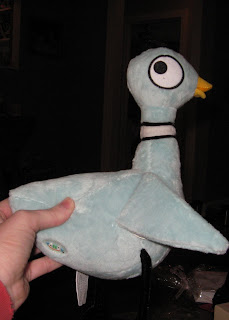 This is Campbell's Pigeon. My sister gave it to him for Christmas. For those of you who don't have small children, Pigeon is the star of several books by Mo Willems. Our favorite is Don't Let the Pigeon Drive the Bus.

Despite having lots of stuffed animals, Campbell hadn't really taken on one as a favorite until Pigeon arrived. Now he can't go to sleep without Pigeon tucked under his arm. When I get him up in the morning or after nap, Campbell is always standing at the side of his crib, Pigeon clutched in his hand.

When you squeeze Pigeon's belly, he shouts, "Let me drive the bus!" It's a line from the book. There have been many times when I've heard Pigeon yelling in the middle of the night over the baby monitor because Campbell has rolled over on him in his sleep. Other times, I hear Pigeon yelling, followed by Campbell cackling. He cracks himself up by making Pigeon talk.

I'm glad all of my kids have found their own security objects. Ella has her Pooh Bear, who has been her companion since she was a baby. He still has a hospital bracelet around his neck from when Ella had surgery on her leg three years ago. Lily has her lovies, which are cloth diapers with patches of fabric sewn on them. We're down to two of them after having lost three others. I had to institute a rule that lovies are only allowed in bed because I got tired of the nightly house-wide search for them so that Lily would go to sleep.

I wonder what New Baby will get attached to.

Posted by hokgardner at 9:23 AM

don't forget that lily had lollie for awhile. provided by you know who. i know how to buy gifts for my nieces and nephew.