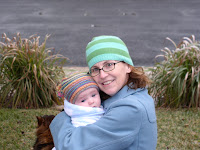 It really did snow here - not much, but it snowed. We had so much fun yesterday just watching the big fat flakes coming down. The kids were all so excited, as was I - possibly more so. I even dragged Campbell out so we could take a picture of him in his first snowfall.
As a result of all the snow and ice, the kids have been out of school for two days, and they're going a bit crazy. I've actually held up better than I thought I would. I think Brandon's being home to help had a lot to do with it. He cooked dinners and went to the store and played with the kids. It made a difference that I wasn't solely responsible for entertaining them. We really had some very good family time together.
Yesterday we had a big group lunch at Lisa R's house and all the kids watched a movie while the grown-ups talked. It was a very nice break. And I realized, yet again, what fantastic neighbors we have and how fortunate we are to all get along with each other. Neighbors don't do much good if you don't like them.
As well as I'm holding up, the girls are more than ready to be back at school again. They are so tired of each other's company it's not even funny. While taking my shower this morning, I was interrupted at least 10 times by the girls, who wanted to tell on each other. After my shower, I confined them to separate rooms for 15 minutes of alone time, and of course they whined that they missed each other. I can't win for trying sometimes. I was very glad to have to take Campbell to his check-up today just to escape from their fighting.
Ella's school starts two hours late tomorrow. I'm still waiting on word about Lily's. As much fun as we've had during the past three days, I think we'll all be happy to be back in our normal routine.
Posted by hokgardner at 9:35 PM