A Night on the Town 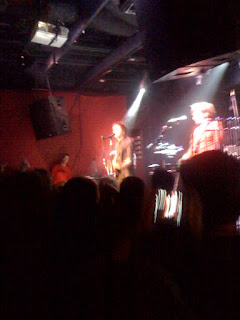 I managed to stay awake for last night's concert, but it was hard. I picked up Liz at 7:30, and we went out for a nice dinner where neither of us had to cut up anyone's food or pick up dropped silverware.
We got to the club at about 9:00, expecting to hear some of the opening act and then be ready for OK Go. Instead, we saw this sign:
9:00 - Opening Act 1 (except it had the band's name, but I forgot it)
9:50 - Opening Act 2 (ditto on the name)
11:00 - OK Go
Liz looked at me and said "I've already had two beers, which is enough. What are we going to do for the next two hours."
My immediate response was, "I wish I'd brought my knitting." Liz just shook her head and laughed. And then posted it to twitter.

We ended up running into some women Liz knew, so we hung out in a quieter bar downstairs for a while before heading back up for the real show.
Once the concert started, I was so glad we'd stuck it out. The venue was a small club right on 6th Street - I don't remember the last time I was on 6th Street at night. Liz and I got offered $1.00 shots with no cover at several bars between the car and the show, and we both had a hard time remembering when the last time we'd done shots was (college).

The place was small enough that even though we were standing in the back, we had a great view of the stage and the band. OK Go puts on an awesome show - they looked like they were having fun up there, which makes a huge difference. Plus, the crowd was really into it.
We bailed out at 12:15 - they'd already played all my favorite songs - and didn't hang around for the encore. I walked in the door right at 1:00 and collapsed into bed. I don't remember the last time I was awake that late, let alone out of the house that late.
It was a great evening out, and we weren't even close to being the oldest ones there.

i feel old just writing this, but ti would have to e a GREAT band for me to do that

Awesome. I love live music and surprisingly, I'm never the 'oldest' one there although sometimes I feel like it. I'm so glad you didn't take your knitting Madame du Farge!

you left before the encore?

awesome!! i should bring my knitting to the mgmt show. :)

I think Heather would have stayed for the encore but was trying to be a good host. :)