Socks - Big, Little and Too Small

As a result of all my Christmas knitting, I'd been a bit burned out. I'd had a pair of socks on the needle for months that just sat in my knitting bag, languishing. I knew I needed to get them finished soon, because they were for a friend, and she knew I was knitting them for her - she'd bought the wool for them, after all.

But instead of working on my friend's socks, I cast on a pair for my Olympic Knitting challenge. Turns out, that was exactly what I needed to do. Working on those socks got me my knitting mojo back, and I've been burning up the needles ever since. 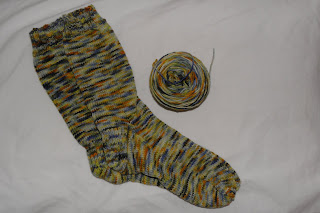 I finished my friend's socks, and they turned out wonderfully. I refer to them as the "Harmony Wood" socks because the colors in the wool match the colors in my Harmony wood needles almost exactly. The wool is Merisock Handpainted from Punta Yarns of Uruguay. It was a little tough to work with at times. It tended to get all twisty and splitty, but the end results were worth it. Plus, one skein is 463, which is enough to knit one pair of adult socks and a pair of child socks. Not that I'm volunteering to knit another pair out of it right now. 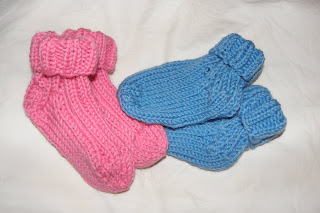 These are my new favorite baby socks. The pattern is a free one from Spud & Chloe, except I'm not using Spud & Chloe yarn, which is lovely but outrageously expensive. Instead I'm using Cascade Superwash in worsted weight. Each little sock takes about two hours. I'm on my third pair and have the pattern down cold now. You'll notice that the blue socks are slightly different than the pink. I experimented with not doing the 2x2 ribbing on the top of the foot. It's easier to knit without the ribbing, but the socks are a little lumpier. I think from now on I'll keep the ribbing. 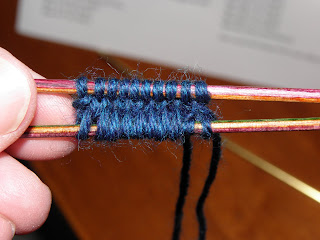 And now for the too-small socks. I ordered a kit from KnitPicks that came with patterns and yarn for seven pairs of ankle socks. I wanted something different and to practice knitting patterns from charts without committing to huge projects. However, from the kit's description, it wasn't clear, at least not to me, that all the socks are toe-up and two at a time on circular needles. I've never done toe-up let alone two at once on circs. After some trial and error and scribbling, I managed to convert the pattern to one sock at a time on DPNs, and I figured out how to cast on toe-up. 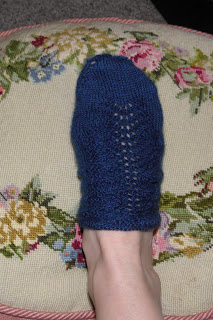 Unfortunately, despite checking my progress as I knit, I cannot get the sock on my foot. It's not because I bound off too tight, it's that the whole dang sock is too narrow. It's plenty long enough, but I can't get it over my heel. Obviously my gauge was off and the needles were too small. Le sigh.

Instead of making another too-small sock to match, I've decided to declare it a practice sock. My cast-on was wonky, and I know that there are some errors in the heel, which involved turn-and-wrap instead of short rows.

So I've cast on a new sock on larger needles, and so far things are going much better.

I have been so negelctful of my knitting. Have not picked up the needles in 6 months. I seem to get a spurt on and knit like a crazy woman for 2 months...and then don't knit a stitch for the rest of the year. Love all the socks though. Maybe they'll inspire me to pick up the old sticks again!

Excellent use of the word wonky!!!