Lions and Tigers and Bears - Literally

On Monday we braved the Spring Break crowds and ventured to the Austin Zoo. The parking was a mess, and the line for tickets stretched out into the parking lot. But once we were inside, the crowds weren't a problem. If you live in Austin and haven't been to the zoo, I highly recommend it. It's a manageable size with a good assortment of animals - most of whom were rescued from zoos, private owners or circuses.

The Bengal tigers are always my favorite. The are bigger than you imagine a cat could ever be. Their paws are immense. This guy was the kids' favorite because he was rolling around and playing and roaring at them. 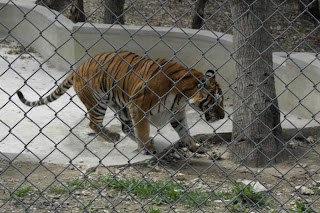 The kids also liked the bear enclosure, but mostly because it was filled with peacocks, ducks and geese, along with a bear who was ignoring the birds completely.
Funny side story - there were two ducks swimming in the bear's pond, and Ella looked at them and yelled, "Look mom! One ducks is giving the other a piggy-back ride." B and I had to turn away before we completely lost it laughing. 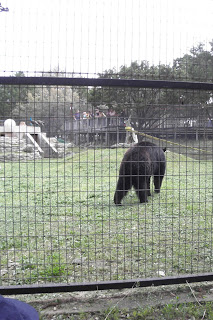 Campbell loved his map, even though he had no idea how to read it. He's still playing with it at home, leading expeditions around the yard. 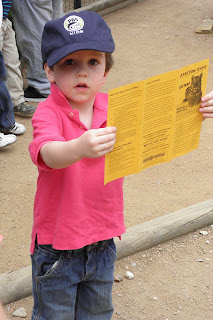 And finally, the real reason for our trip to the Zoo - lion cubs. They are female, eight-week-old cubs that may be Barbary lions. The Zoo received a request to take in a pair of lions, and when they arrived it was discovered that the female was pregnant. Since the Austin Zoo is a non-breeding facility, everyone was thrilled to have babies on site. The cubs may be part Barbary lion, which is extinct in the wild. Some lions still carry Barbary DNA, so there is a world-wide organization that is testing lions and finding those with the strongest genetic link. Those lions will be bred with the eventual goal of releasing them into the Atlas Mountains in Morocco.
That's all very interesting, but mostly, the cubs are just squee-ably CUTE! Lily, my animal lover, wanted to bring them home with us. We had to explain that while they're cute and cuddly now, they'll quickly get big enough to rip her arm off and eat it in one bite. 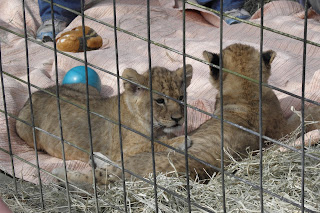 Man I have GOT to get to the zoo, stat!

OH MY! they are cute! Our zoo had a litter of baby lynx a while back and I would love to have taken one, declawed and de-fanged it and raised it as a house cat. Imagine cuddling a huge kitty!

We used to frequent a duck pond, where my mother convinced us the ducks were playing, because my brother and I thought they were drowning each other.

I haven't been to that zoo since my children were young like yours. Maybe I should hike on down from the far north of Austin.

Sounds fun. Campbell with that map is who is squee-ably cute!

(Almost)nothing beats big cat cubs for squee-ably cute. Those big paws always look so soft...until you think about the claws. LOVE the tigers, they are so gorgeous! We may have to hit the Philly zoo during our spring break. It's older, so not as big and animals are close up! Amazon Giant River Otters are probably our favorite.

What a great way to spend a spring break day! And those cubs are so cute!

How lovely that there's a zoo based on rescued and donated animals rather than wild procurement. Looks like a fun day. Taronga Zoo in Sydney has the best view in the world! Wouldn't mind being a giraffe there! Nice avoidance tactics with the ducks!

Those lion cubs are SO cute! I just want to take a bite, but they'd probably bite me first!