Eighteen days ago, I signed on for the Yarn Harlot's Knitting Olympics. The goal of the Knitting Olympics is to cast on a project during the Olympic opening ceremonies and then finish by the closing celebration.

I cast on a pair of socks out of Franklin's gorgeous Panopticon wool. As I knit, I noticed that the colors in the wool closely matched the greens and blues in all the Olympic signs and banners, which was really cool.

Now some knitting purists might argue that working on a pair of socks for the Knitting Olympics isn't enough of a challenge, but I beg to differ. Given my time constraints, finishing a pair of socks in 17 days was going to require world record knitting speed from me. I once knit a pair in 14 days, but that was back when I only had three kids. 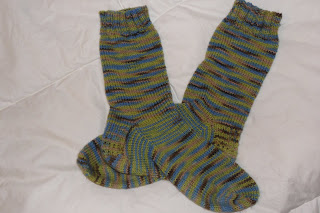 Et voila! Completed socks. I finished them up on Sunday and wore them to bring the US hockey team luck. Whoops. Maybe I shouldn't have worn them after all. Then I wore them to watch the closing ceremonies, which was really one of the oddest things I've ever seen. We laughed hysterically during the entire last half hour, and I'm not sure that's what the organizers were going for. I mean really, giant inflated beavers and flying moose? A terrified kid dressed as a hockey puck? Shattner performing poetry? It was a spectacle, for sure.

I will miss the Olympics, though. I'm the biggest geek about watching them. I love watching young, earnest athletes putting it all on the line to fulfill life-long dreams. So few win medals, but for each and every person there, just participating in the Olympics is the culmination of a life spent training and sacrificing in the name of their sport. It's a beautiful thing to see.

It's chilly here today. So I think I'll wear my new socks in honor of the athletes who are now headed home.
Posted by hokgardner at 10:04 AM

Oo oo oo! I'm an olympic geek too! I didn't sign up for the knitting olympics because I was chicken, but I managed to finish two (2) pairs of mittens from opening to closing ceremonies. I was too chicken to commit to socks, even to myself.

Love the socks, but I think in 2014 you should challenge yourself to make a knitted hockey jersey.

Socks. *shudder* I'm terrified of them. Yours are lovely but I'm sure I'd go insane and stab myself with a needle if I tried. Yay for knitting olympics!!