This past Sunday was one of my favorite days of the year. For the 4th year in a row, the Austin Marathon came right down our street, and we hosted our annual race party. I know that being so excited about having a race come down my street makes me a huge running geek, and I'm fine with that.

When I ran my first marathon, way back when, I loved that the race wound through neighborhoods and that people sat out in their front yards to cheer. I thought it would be the coolest thing ever to live on a race route, but I always figured I'd have to move. I mean, who would ever think to bring a major race down our little block?

Then four years ago, in September, I started noticing large packs of runners coming down my street. So I looked up the marathon course and was thrilled to see that it included our block. Since then, we've opened our house up on marathon day to anyone who wants to hang out and cheer.

This Sunday's party was another great one. The weather was perfect for spectating, and the runners seemed to appreciate our music and noise. One runner claimed I saved his life by giving him salt to dip his orange slice in, and another gave me a sweaty hug after I let her use our bathroom. Plus I got to hang out with friends and neighbors and cheer for other friends who were actually running.

It was a wonderful way to spend the morning. 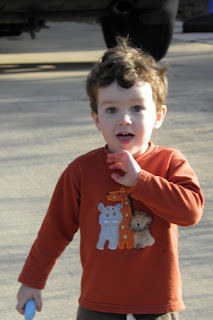 Our block is closed to traffic starting at 6:00am, and the kids love that they can play in the street without worrying - at least until the runners come through. Campbell had a great time joining the big kids in drawing chalk pictures in the street for the runners. 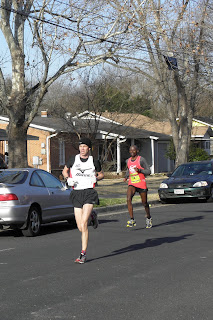 Some of the leaders. We were out there from the first runner until the last walker. Campbell and I even waved to all the trucks that followed the last walker, picking up cones and signs and porta-potties. 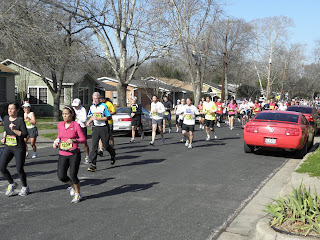 Just some of the teeming masses. We had racers coming past the house for more than four hours.
Each year race organizers tweak the course in a few places. And each year I keep my fingers crossed that none of their tweaks involve my street. I love marathon day.

Posted by hokgardner at 2:35 PM

How wonderful! Our town hosts a huge semi-amateur bike race every year, and I always envied the people who lived on the route and put lawn chairs out to watch the race.

That's pretty cool. My favorite "runner" is the little one in the red shirt with the chalk in his hand.

Oh, how FUN!! Chalking the streets is a GREAT idea -- I'm going to steal that for ours in April.