Lily's birthday was a few weeks ago, and we had a roller skating party for her. The kids all had a grand time, and I was impressed with how well they did on skates. For some, it was their first time on wheels. 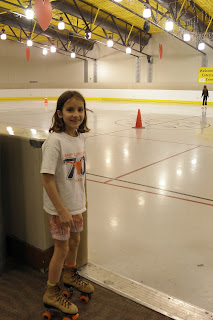 Ella was ready to skate first, but she decided to wait for company before hitting the rink. She was a little unsteady at the start but improved greatly at the end of the hour of skating. 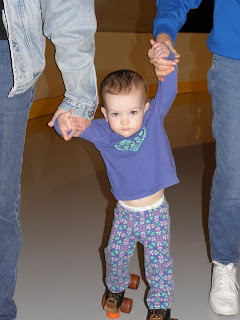 B's mom and aunt decided to put skates on Elizabeth. They got the smallest pair the place had and laced them up. Elizabeth had a blast and did two laps around the rink. By the end of her first lap, she was getting frustrated with her grandmother and aunt for holding her hands because she wanted to take off all by herself. She's showing a streak of stubborn independence that's worrying me a bit. 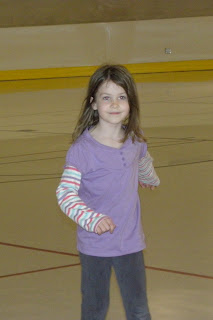 When a friend heard about the skating party, she started coming up with Roller Derby names for Lily. Her suggestions were Lightning Lil and Ballerina Bomber. I said I liked Ballerina Basher better because it sounds a bit more violent. I can just picture Lily out on the derby track - pink tights, a tutu, a black helmet with a skull and crossbones.
The roller rink had a poster advertising a junior Roller Derby team. Perhaps I should sign Lily up. She's already got a good name for it.
Posted by hokgardner at 7:07 PM

We have a rink close to us that does great events for kids. Mine loved it when they were little and it's safe enough to drop them off and pick them up after a couple of house when they're 'tweens'. Looks like fun and Ella sounds like quite a character!

Yes! Ballerina Basher! Only in Austin is there a roller derby for kids.

By all means, sign her up! You need another activity on your plate!

Love Elizabeth on wheels! She is cute as pie.

Great pictures! Love the name Ballerina Basher - couldn't have picked a better one myself!

I had really vivid roller derby dreams the other night after having dinner with a friend who does a lot of roller derby photos in baltimore and then watching Whip It.

Junior roller derby? That sounds fantastic. I recently got trapped in the middle of a vigorous discussion about whether it was criminally negligent to allow a kid under 18 to do something as dangerous as take horseback riding lessons. (at a very chic stable under close supervision). I stayed very quiet because it was fascinating and I also didn't want to get in the middle of it since I have no kids but want to continue to have friends. lol. I can't wait to mention junior roller derby and watch their heads explode. bwahahaha.