Campbell has had two very big treats in the past few days.

First, on Saturday, at our neighborhood's annual festival, Campbell was able to sit in a fire truck. The local fire station sent the engine and two firemen to meet and greet the kids and let them climb all over the truck. Campbell hopped right in and refused to come out. He ended up sitting on the far side, looking out the window and grinning like a fool. When I walked around to his side and said hi to him, he said, "I wike da firetwuk momom." It's the longest sentence he's ever said.

B had climb in after about 20 minutes and drag Campbell out, kicking and screaming. Shortly after, the firemen had to leave on a call, which was a good thing, otherwise Campbell would have spent the rest of the day trying to drag us back over to the truck. 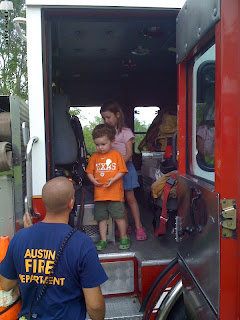 On Monday, as Campbell and I were driving home from the store, we passed by the Department of Public Safety Headquarters (DPS is the equivalent of the state troopers), which is near our house. I saw that a DPS helicopter was on the landing pad out front, so I pulled into the parking lot to let Campbell have a better look. When I saw that the pilots were out loading gear into the chopper, I got Campbell out of the car, and we walked over.

In this post 9/11 era, I half expected the pilots to tell me that we weren't allowed to get anywhere near the helicopter, but instead they were very welcoming. They asked Campbell his name - he told them it was "Big Boy" - and then held his hand and walked him over to the helicopter. One pilot talked to Campbell about the helicopter and then asked if he would like to sit in it. I was afraid that Campbell would turn into his shy self and cling to my leg, but instead he held his arms up to the pilot, who lifted him in.

When I bemoaned my lack of a camera, the other pilot pulled out his cellphone and took a picture, which he then e-mailed to me. Campbell got to sit in the pilot's seat and hold the control stick and push buttons to his heart's content for about five minutes. 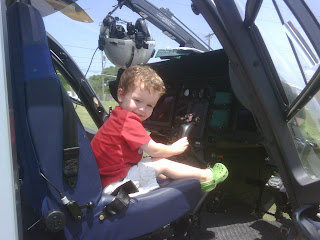 I think the grin on his face says it all - that is one happy little boy.

Posted by hokgardner at 2:56 PM

That is adorable. When the boys were younger, we were total firehouse groupies. I don't think there was an engine company we didn't harass at least once.

That is so cool! We have stopped more than once with our four year old to see fire trucks or police cars or ambulances and the guys are always awesome! It is great that they are so willing to take their time to talk to kids and it means the world to my little boy!

Oh cool! what is it with boys and emergency vehicles huh? Mine got to sit in a firetruck and talked about it for days!!!!

thanks for stopping by The Mouthy Housewives. With all those kids, we know we're bound to hear from you soon.

so cute and sweet.

I'm always shocked when someone actually remembers to email me a picture. I guess b/c I always forget.

He's so cute and I'm not a lover of toddlers! Mind you a visit to the local fire brigade with the playgroup kids was as much fun for the mums as the children . .c'mon, we all love a firefighter and those silly hats and big boots!

That is the best smile I've ever seen on Campbell! He looks very, very content sitting there in that helicopter :)