And the house is a little emptier now 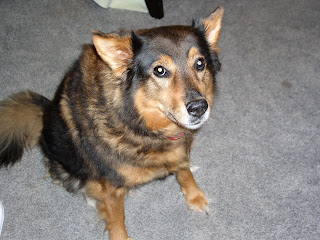 Thirteen years ago, back when B and I were still dating, he spent about a year living in a small down in Mexico, about two hours south west of El Paso. While he was there, he rescued a teeny, tiny puppy from the streets. She was too young, really, to be away from her mother, and she probably would not have survived if B hadn't taken her in.
Ever since that day, B has been Mollie-dog's person, completely and totally. She was not very happy when B moved back to Austin and in with me because it meant Mollie-dog had to sleep on the floor, not in bed next to B.
On one of their very long drives between Mexico and Austin, during a rest stop, Mollie-dog got hit by a car and ended up having to have surgery on her back right hip. It was a long recovery, but you couldn't really tell that she had an injury unless you knew what to look for.
In the past year, Mollie-dog has become increasingly cranky. She's on daily medication for the arthritis in her back right hip, and her hearing and sight have diminished. She's never been a fan of hot weather, and last summer was really hard on her. She spent most of her days asleep on the cool tile floor in our shower. She had already started slowing down again this spring as the weather got hotter.
On Sunday, her crankiness hit a new low, though. She bit Campbell on the face. He's not badly hurt - two cuts and a black eye. He's already forgotten about the injury.
But the incident made it clear to us that it's not fair to Mollie-dog to keep her here. She gets nervous around kids, and we have a whole house full of them. We just couldn't risk that she'd bite someone again.
So today she left to live with B's father, who has a big house and lots of land. And she really is going to live with grandaddy - it's not just a euphemism. Even though we'd talked to the girls about what was going to happen and promised the girls that they could visit, there was much wailing and sobbing, particularly on Ella's part, when Mollie-dog and grandaddy left today. B and I did our best to comfort her, but she eventually climbed up her favorite tree to have a good cry. B and I figured that it was best to let her have that time and told her that when she was ready to come down, we'd give her lots of love.
Ella is down from the tree, now, and the house is relatively calm. But I know we'll have more bouts of tears, which is to be expected. In the meantime, we're just grateful that Campbell wasn't seriously hurt and that B's dad was willing to take Mollie-dog. I can't bear to think of the alternatives in either case.
We'll miss Mollie-dog. The house feels a little emptier without her.
Posted by hokgardner at 5:34 PM

it's heartbreaking to have to choose even though the choice is obvious. You did the right thing that is for sure

Living with dad is a great solution for everyone. This is not a sad day but a happy one!

Oh Heather, that is so sad for the kids but better to be safe and much better that she has a nice home to go to instead of the metaphorical 'farm'. My nephew was badly bitten by someone's family pet and they had I put down. It was the responsible thing to do but devastating for the family. Hope your little one is OK.

i'm so sorry to hear that! but it's what you had to do--so glad B's dad could take her in.

Thank goodness Campbell is okay! Poor Mollie-dog. It sounds like this will be a much better place for her.

Oh, how scary! And hard. But it sounds like you guys ended up with the perfect solution in the end.

This will take some adjsting to, but at least you can still see her. Glad Campbell is ok