Yesterday was Lemonade Day here in Austin, and we set up a stand. The girls had been looking forward to it for weeks - ever since I told them that I had signed us up to participate.


The girls were ready to set up the stand at the crack of dawn, so we ended up starting earlier than our advertised 12:00 opening time. The kids' interest in actually selling lemonade waned after a while, and they became more interested in standing on the corner to flag down cars and grab passersby.


They definitely drummed up some extra business - it's hard to resist five kids jumping up and down shouting, "Come buy lemonade!" repeatedly. Although some people did. One family - mom, dad, little kid in a stroller, and grandparents - walked right by on the other side of the street without even looking at us or acknowledging the kids' presence. It was very strange. Everyone else at least waved, even if they didn't stop to buy.


Once we took out expenses and divvied up the money among the seven kids who worked, the girls didn't make a whole lot, but that wasn't really the point. They had fun making the signs and the lemonade and hanging out with their friends. Plus, Ella learned some aspects about running a business. It was a great way to spend a few hours. Kudos to my friend Marion for getting the event started in Austin. The girls are already planning how to make an even better stand next year. 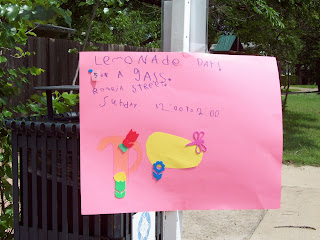 The girls made great signs, which we hung out the day of the stand. 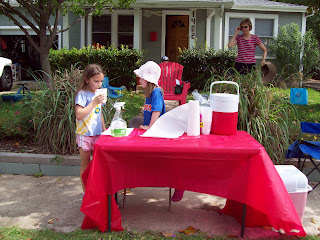 Open for business and sampling the product. I had to stop the kids from drinking all the lemonade before we'd had a customer. I also had to stop Lily from buying 27 cups with money out of her piggy bank. 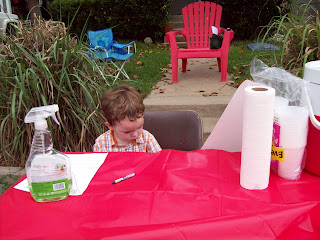 Campbell manned the table for a few minutes while the girls ran around. He wasn't sure what was going on, but he liked the lemonade. 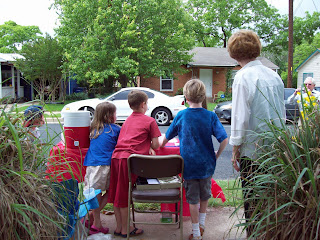 For most of the day we had more staff than customers, but the kids worked out a great little production line and made sure everyone had a job.

My kids did a stand back in Orlando once and we had similar phenomenon of folks ignoring us - we lived in neighborhood with one way in & out and good hearted folks just drove by (slowly) with not even a nod - odd! JP

what a cute idea!

Aww that's so cute. I'd have crossed the road to buy a cup! We have a couple of kids in our street who set up a tomato stand a couple of days each year. They're the grandchildren of the people who live there and the tomatoes are home grown and delish.

how fun! I'm impressed you were willing to go through with that--lot of work, but definitely worthwhile. :) I love the pink signs

Sweet! My youngest wants to put up a stand, but we don't get a lot of traffic on our street and what we do get goes whizzing by. Maybe when the weather warms up more. I'm sure it was a great experience for the girls (and Campbell).