Last Christmas my mother, also known as knittergran, gave me a lovely skein of Noro sock yarn, which I promptly lost. I ransacked the girls' room hoping it had been stashed in a craft bin or toy bin, but no luck. It's driven me nuts that the yarn had just vanished. But then last month, when B was cleaning out the closet to make room for Elizabeth's cradle, he found the yarn. It had gotten crammed in the closet somewhere.
Once I finished knitting a hat for Elizabeth to match her Elizabeth Zimmerman Surprise Jacket, I cast on a pair of socks with the Noro yarn. At first, the stuff drove me insane. I pulled from the center of the skein, and the yarn, which is single strand, tangled horribly. At one point, when I was trying to loosen a huge knot, the yarn broke. Grumble. I solved the problem by pulling out the ball winder and winding the skein into new balls. Now I love the yarn - the colors are lovely and there are no more knots.
However, I have learned an important lesson about gauge. The pattern I'm working with called for 76 stitches at 8 stitches an inch on size 3 needles. After knitting about five inches, I realized that something was horribly wrong - mainly that I'm knitting a sock that would fit an elephant. Here it is next to some other hand knit socks. The second sock on the left isn't the best example because I had just been wearing it, and it was a bit stretched out. 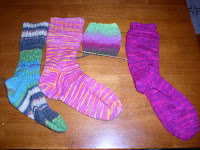 So I consulted with mom, who consulted with her knitting books, and we decided that I need to frog it all back and start from scratch with 72 stitches on the larger size 3 needles.
Sonofab*tch
The lesson I'm taking away from this isn't necessarily to knit swatches for gauge, but rather to check my gauge before I'm five inches into a sock.
Posted by hokgardner at 9:33 AM

my mom has been knitting lately. last year she made everyone scarves. mine turned out okay, but the one she made for brad was PURPLE and way too short. yesterday she told me she's looking at new patterns. i am afraid.

Oh I can empathize! I never make swatches either - let me tell you I've been burned a few times.

Best of luck with your reknitting!

Swatches really haven't helped me much either. I'm trying to make fingerless gloves. I made a swatch that fit the dimenstions, but the glove is still loose. Oh well--it's still wearable.

Oh, rats. I have three projects OTN - none of them socks - and now that I've looked at your sock pictures, my fingers are itching. Time to start on socks after a few months' break.
Four projects OTN....

I am a new knitter and haven't ventured past making scarves, hats and blankets yet. I want to try knitting some sox but after reading your post I'm a little scared! Maybe I'll wait and see how yours turn out.