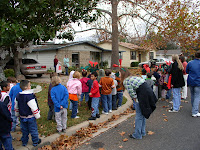 I volunteered to help chaperone Ella's class field trip today. The teacher's plan was to go caroling in the neighborhood, which didn't go quite the way she expected. But more on that in a minute.

Two classes went caroling - about 40 kids. Ella's class had half a dozen parents show up to help. The other class had none. The teachers lined all the kids up and had them hold on to a length of rope in an attempt to keep everyone together. Turned out to be a pretty bad idea. The boys delighted in playing tug-of-war with each other and wrapping the rope around their friends. Other kids thought it was fun to sit on the rope as the other kids were walking along. Then there were the times when the kids on the front end of the rope were walking, but the ones on the back end weren't, bringing the ones in front to a screeching halt. Finally the teachers gave up and had the kids walk with partners.

Campbell and I brought up the end of the line, keeping the stragglers with the group. Two little boys kept fighting over who got to be the absolute last person in line. I had to break up a wrestling match more than once. Other kids would fall behind because they spotted something they wanted to investigate. It's amazing what can distract kids - a leaf, a mud puddle, a fence, a parked car. You name it, we stopped to look at it. Another boy fell behind the group because he was busy walking backwards so that he could warn me not to step on things.

The caroling wasn't very successful because no one was home. We caught two elderly women at the first house we went to and sang to them. But then we walked and walked, looking for someone else to sing to. One man told the mom who knocked on the door that he was too tired to listen to singing. Another woman just said no thanks and slammed the door - talk about Christmas cheer. Finally, we found two people who came out and walked across the street to where the kids were waiting. They were very appreciative of the kids and clapped for them.

We gave up at this point and turned the kids loose on the playground for a while. I wasted time trying to referee the melee on the slide before throwing my hands up in defeat and walking away; the boys WANTED to sit on each other while going down the slide.

I was worn out by the time we herded the kids back to the classroom, as were the teachers. But I got to go home - they still had hours left before they could escape. Those teachers earn every penny of their salary and deserve so much more.
Posted by hokgardner at 11:28 AM