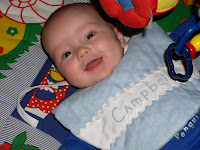 I was having a big pity party for myself this morning. I found out yesterday that a friend who had a baby, by c-section, four weeks AFTER I did, ran 10 miles yesterday. I'm still struggling with three miles. What am I doing wrong? I know I have three kids, and she only has one, but still. I ought to be farther along than this. I had planned to run with a friend this morning and push myself a bit, but I had to cancel because I have done something to my neck. Right now it hurts to walk, so there's no way I could go for a run. I pondered doing a slow jog through the 'hood, but after being up for a while this morning, I gave up on that idea.

So now it's been a week since I've run, and I'm more than a little frustrated. And hearing about Moya's campus run didn't help things.

But after spending an hour playing with Campbell this morning, I snapped out of my self-pitying mood. He's just the happiest, smiliest baby right now. He sat in my lap and talked and laughed and kicked for an hour. And that hour made not being able to run seem like a really small price to pay. If I had gone running I would have missed that bit of time with him.

Posted by hokgardner at 8:52 AM