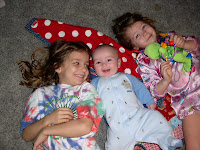 It turns out I'm not the only person in the house who just loves, loves, loves babies. Ella and Lily engage in bouts of baby worship on a daily basis. Campbell will be sitting quietly in his seat and one or the other or both will just descend on him. They cover him in kisses and sing him songs and give him hugs and then zoom off, again, leaving him a little bewildered.

Ella is a little more restrained than Lily in her affections. Ella likes to sing Campbell songs and "speak" to him in baby language, which mostly involves saying "goo-goo, ga-ga" to him over and over again. She thinks she's communicating because Campbell usually laughs when Ella does it.

Lily is far more agressive. We say that Campbell is as big as he is so that he can survive her love. She likes to climb into his car seat with him, and she rocks him so hard in his bouncy seat that we're afraid she's going to catapult him across the room. We're constantly saying, "Lily, not so hard!" Fortunately, Campbell's a good sport about it.

I've discovered that Lily becomes much more attentive to Campbell when other people are paying attention to him. She'll start hugging and kissing him, and then the person will say, "Oh what a good big sister you are!" Lily just eats it up - she's got the system figured out. If she pays attention to Campbell, people pay attention to her.

That having been said, Lily does still love on Campbell when no one's watching. I'll come in the room and catch her talking or singing to him or reading him books even though no one is there to see her doing it.

Watching the girls with Campbell makes me feel like we're doing something right as parents. I know there will be sibling rivalry - heck, there already is - but at heart, they all love each other.
Posted by hokgardner at 6:17 PM

You have a sweet family, Heather.