Honest to dog, these socks are going to be the death of me.

I'm working on another pair from the Knitpicks kit that I've already had so much trouble with. This time, the pattern calls for reading a chart. This is the first time I've knit from such a complicated one, and it's tough going. 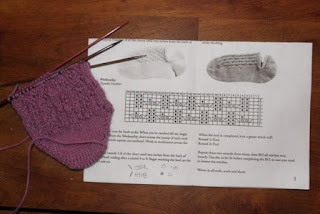 My first attempt did not go well. You can't really tell from the picture, but my sock doesn't have any discernible pattern to it at all. I came out with a different number of stitches each time I knit the rows with yarn overs and k2togs.

Row 2 (click to embiggen) is the one that gave me fits. I knit it four times and got a different number of stitches every time. So I e-mailed Knitpicks to see if there was an error in the pattern. A very nice person e-mailed me back and gave me row 2 written out to see if it worked. It didn't. The way I knit it, I needed 40 stitches, not 30. So I sent the written out row to my mother, who was at knit knight, and asked her and the other members of her coven to take a look.
Turns out I was doing it wrong. When the pattern called for two yarn overs in a row (the open circles on the chart), I was doing a yarn over, knitting a stitch, doing a yarn over, knitting a stitch. I didn't know that doing two yarn overs was as simple as just wrapping the yarn around the needle twice. D'oh. 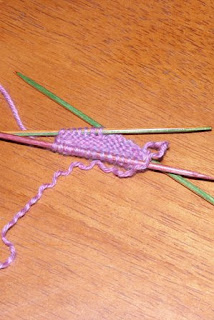 My great idea was to rip the sock back to end of the toe section and pick up 60 very teeny stitches. I ended up having to rip back almost to the beginning before I could get the correct number back on the needle. Sonofabitch. 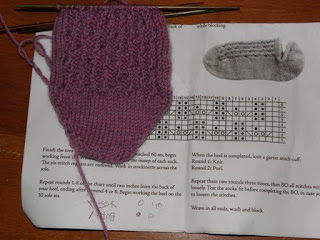 But I'm glad I started over. Now that I'm doing the yarn overs correctly, I can see the pattern. And even better - I can read my knitting as I go so that I don't have to study the chart every other stitch to make sure I'm on track.
Of course, it couldn't be completely smooth sailing. I came around the corner and found Elizabeth holding two of the needles in her hand, about to pull out the third. I'm ashamed to admit that I let out a very undignified shriek before snatching everything away from her. I managed to pick up the 30 stitches, but now I'm a stitch short on the patterned needle.
This sock just doesn't want to be knitted.
Posted by hokgardner at 4:37 PM

Oh, goodness. I tried to learn how to knit when I was on pregnancy bedrest. I could not do it but I know quite a few people who did it beautifully.

It's a beautiful skill to know... and satisfying. Instant results from your labor and "free "clothes. What could be better?