I had set out a rather ambitious holiday knitting plan for myself, especially when you consider that I have four children, one of whom is a newborn, and I had taken on some freelance work. Needless to say, my plan didn't work.

First on the list was this scarf for Aunt A. I had intended to have it done by Thanksgiving as a thank you gift for hosting the meal. I ended up taking it with me to prove to her that I was actually knitting something for her. I finished it a week later. And my plan to knit scarves for lots of people went out the window. 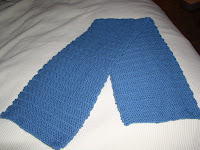 Knitpicks Yarn of the Andes in Williamsburg. Cast on 40 stitches (if I did it again, I'd only cast on 30), knit seven rows, purl one. It's called a Puzzler's Scarf.

Then I planned to knit and felt lots of these little snowmen from the Knitpicks December catalog. One lumpy guy later, I realized there was no way I'd get 7 done for the neighbors. So now my kids fight over Lumpy.

These mittens are actually my success stories. I knit two pairs of them, but I only took a picture of one pair. They're a quick and easy knit. If I could knit for more than 15 minutes at a time, it would probably only take me a day per mitten. The pattern is from Ann Budd's basic knitting book. More Yarn of the Andes from Knitpicks. 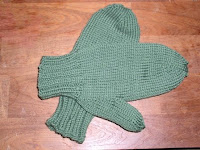 My sister wrote a blog post a while back about how she thought people should wear special hats to sleep in - like sleeping caps. Ages ago, my neighbor gave me these cool knitting pattern books from the '50s, and one of the patterns was for a "Snug Cap." I thought it looked like the perfect sleeping cap for my sister. So I went to Joanne's Fabrics and bought the biggest, chunkiest acrylic yarn I could find, all the while wanting to tell people in the yarn aisle that I don't normally buy yarn by the pound.

One night before Christmas, my sister saw the knitting book and the picture of the cap and went to get her phone to take a picture of it. She said it was exactly what she wanted for a sleeping cap. So my "gag" gift turned into a real one. Except I didn't get it finished before she left, so now I'll be mailing it to her (I'll be shipping a box next week, Keeffer).

I have one Christmas project to finish, a hat for my sister-in-law. I'm almost done with it, and then I get to start on some other projects that don't have deadlines. A friend gave me a gift certificate to Hill Country Weavers as a baby present, and I used it to buy some yummy Arucania wool to make Teeny an Elizabeth Zimmerman Baby Surprise Jacket. I had enough left over on the gc to buy some gorgeous sock yarn for me, too.

To think, I once figured I'd run out of things to knit. But here I am, planning three projects ahead.

Posted by hokgardner at 8:49 AM

You're doing awesome! I'm still working on these damn fingerless gloves that I started in September. I'm determined to finish them this weekend, though--you've inspired me. :)

hi! i found you through NYC momma and noticed our similarities- i'm a freelance writer with Three kids, not Four, but it's packed days here too...i like your hat :)

Pretty impressive to this non-knitter's eyes! I am always so excited to find other bloggers with four kids...I'm not quite there, but soon and the days are packed, but fun.

Another impressed non-knitter here. couldn't begin to unravel the mystery of knitting, pardon the pun (that is a pun right?) God, I'm an idiot