Sunday morning was a bad one for Ella here at chez hok. There were tantrums over clothing and chores, complete with foot stompings and screaming. Ella spent much of the morning in her room while Lily played outside with Campbell and the kids next door.

After much discussion, B and I decided to let her go to a birthday party with her grandmother. Turns out maybe we shouldn’t have done that.

Neither of us had noticed the sign in Ella’s window, facing out. I saw it this evening when we came home from ballet and pointed it out to B. I think it’s kind of funny, but B is taking it personally. He told her that if he really was the worst dad on earth maybe he shouldn’t take her to the rock climbing competition in Dallas this weekend. Ella looked suitably chastised and scrambled to take the sign out of the window. 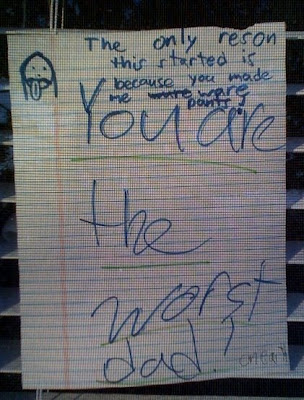 But then she made things worse by dropping a note in B’s lap that said:

I wrote the sign because I was really mad and if you act like the worst dad you wont get any love.

As you can imagine, that didn’t go over well. Ella got put in bed with the threat that if B heard any noise out of her she won’t be going to Dallas this weekend. B retreated to the back the porch to stew. I kept reminding him not to take it personally and that if we don’t make our kids mad at us once in a while we aren’t doing our jobs. He just kept grumbling at me.

Things were better this morning. B made sure to give Ella an extra hug before she left for school, and she was on her best behavior.

But I still wonder what Ella thought would happen when she gave B the second note. Did she really think it would make things better? I also wonder what our neighbors must think of us.

Posted by hokgardner at 9:37 AM

Oh, HAHAHAHAHA, oh. Boy. Poor B. But man, if I had a nickel for every "I HATE YOU! YOU ARE THE WORST MOM EVER!!!" notes or comments or whathaveyou, I could go to a hotel room for a weekend, a long one, and finally get my boobies back. B will get used to it. My favorite response to all of that is "I'm sorry you feel that way. I love you. You're welcome to go find new parents if you want." It usually brings things back. Though it is going to get worse before it gets better (my oldest is a year older than Ella, I think). I'm dreading the teenage years.

Oh, yeah, I forgot. It's also a sign of intelligence and a strong spirit that she did that - maybe that'll help B feel better? You WANT her to be that way.

Oh, I know this is the wrong reaction...but that's frickin' adorable. I hope you're keeping it for posterity.

WOW!!! I am so sorry for laughing, but that is the funniest thing I have heard from a kid in a long time. I hope she turns it around because her cousins are so excited to see her in Dallas.

I take everything personally. Tell B, I know how he feels. I know she's just being a kid but it's hard, especially when you are divorced b/c of course everything that goes wrong in the house is b/c I didn't stay married. Nice long guilt trip I'm on huh?

Wow, I would be really angry. Dallas? Heck, Jessamine would be lucky to get beyond her doorway!

Two things (and, I know, I'm late to the game. I haven't visited Bloglines since before Christmas - literally... just couldn't find the heart for it, or something, somehow):

1. I had Emily start a journal this week. Not as a punitive thing, but because she was in trouble, Again, and I couldn't come up with a suitable punishment, so I just had her sit, silently, on the couch for half an hour. It was going to be longer, but then I sat down next to her and started talking with her, and at one point, I made the comment, "I just don't know how to make you think about your own actions." And then I realized, sure I do: give her a journal and assign 20 minutes a day to write in it. I was very careful not to make it feel punitive, and - much to my shock, because her handwriting is sloppy and she rarely chooses to write things when she can draw - she LOVES it. She asked us to read it the first day, "to make sure I'm doing it right," but since then she has kept it to herself. It's a challenge, but I'm honoring her privacy.

2. Go on a date with your husband. Bring the youngest, if that makes the most sense - babies ARE easy - and leave the rest with a non-family type if at ALL possible. Because family might tell you about the kids' misbehaviors while you were gone, or family might play too nice, or any number of things, but a non-family (either unpaid adult friend or paid teenager) will maintain a certain emotional distance and then will smile broadly when you get home and say, "Oh, everything went great." Everyone benefits from this. We did it today, first time in ages, and it was WONDERFUL.