This is getting old

So it's been a disgusting week here at chez hok. Everyone but Lily and Teeny has been sick.

Campbell kicked things off on Monday by throwing up lots. He woke up Tuesday all bright-eyed and bushy-tailed, like he'd never been sick, but I kept him home from preschool anyway. We did go in for an hour so he could attend his class Christmas party, not that he cared about it in the least.

Wednesday morning I left him with a sitter while I went to Ella's class party with Teeny in tow. After lunch I took Campbell and Teeny with me to Lily's class party, which was held in the library at school. We had been there all of 10 minutes when Campbell threw up all over me and the library. I was mortified. Fortunately, several mothers helped me round up a plastic bag to put Campbell's vomit-covered clothes in and paper towels to clean up his mess. After that, I said a quick good-bye to a disappointed Lily and bolted for the door.

Campbell was droopy the rest of the day but didn't throw up again until about midnight. Fortunately, B was on duty at that point.

I woke up at 5:30 to feed Elizabeth and then started throwing up. I woke up B at 6:45 so he could get the girls off to school and then collapsed back in bed. B took care of Campbell for the morning and the girls when they got home from school as I staggered out once in a while to check on things.

Ella started complaining that her stomach hurt at bedtime, so we made her a pallet on the floor in her room with a puke bucket to avoid the splatter fest we had last time she was sick. According to B, she threw up tons in the middle of the night. So much so that he made her a nest on the floor in the bathroom so that she could rest between bouts. B, being B, took a picture. Somehow I figured Ella would be in college before we saw a picture of her passed out on a bathroom floor. 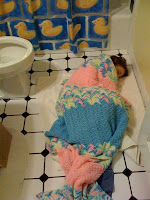 B was sick all day Friday and hid in bed while I held down the fort despite a migraine - only one parent at a time can be sick. It turns out grandparents aren't readily willing to babysit vomiting kids. Ella was droopy all day and took a long nap on the sofa, and Campbell was a horrible crank.

I figured today would be better, that maybe we'd all be on the mend. Turns out not so much. Campbell was horribly fussy this morning, and just as I picked him up to get him to stop crying, he threw up again. Sigh. Immediately afterwards he started begging for food. The poor little guy is so hungry, but I'm afraid to give him anything except toast.

Lily desperately wants to be sick so she can lie on the sofa and drink ginger ale and watch cartoons all day. B, Ella and I keep explaining to her that being sick means throwing up, but she seems to be willing to pay that price. I'm not sure how she hasn't gotten sick yet. Maybe she'll be lucky and avoid it all. I'm praying to the FSM that she does.

I'm at the end of my rope, which was pretty short to begin with. I'm doing load after load of laundry and spraying the house down with Lysol and scrubbing surfaces with bleach. I've left the house twice in the past three days, all for stupid errands - like buying more laundry soap.

I may not recover from this.

Gee, if THIS grandparent weren't in Atlanta, she would be HAPPY to babysit vomiting children. (vomitting?)

i'm not sure i want to get there tomorrow.

Hang in there. It WILL pass - you will not all still be puking a month from now. I promise. I know it's hard - been there, done that, washed all the towels 900 times and thought I'd die. I'm sorry you got hit right before the holidays.

OH NO!!! my complete sympathies are with you.

And a pox on those grandparents

That is the most precious picture. Sorry you are all sick but i've been reading a lot of blogs today and they are full of vomit stories so know that you are not alone.