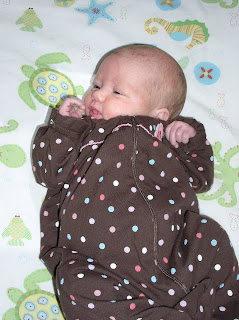 Elizabeth had her check-up this morning, and the news is all good. She now weighs 8 pounds, 12 ounces, which means she has gained more than four pounds in the 8 weeks since we brought her home from the hospital. She weighs enough that she is on the regular growth chart for weight now, not the preemie chart.

Unfortunately, she had to have her shots, which she did not like one bit. I haven't heard her scream that hard since was in the hospital and the nurse was putting in her feeding tube. But once the shots were over, Elizabeth calmed down pretty quickly. Now she's asleep in her car seat, recovering from this morning's trauma.
Posted by hokgardner at 7:57 AM

She is so cute! Such wonderful news for you!

Awww...she is just divine. The poor little thing getting her shots. I always got quite upset when my children got their jabs as babies! It always took me twice as long as them to get over it!