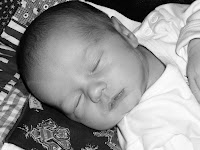 Today is Campbell's first birthday, and I'm feeling a little sad. I know he's my last baby, and I feel like I have to hug and snuggle every ounce of babyness I can out of him now because he's getting so big, so fast. Last week he decided he was going to walk, and now he walks everywhere. It looks so ridiculous to see someone so short staggering around the house, but there he goes, off on another lap around the living room.
But to temper the sadness, there is the absolute joy that Campbell has brought to our family. When B and I were discussing whether to have a third child, the only thing I could say to counter all of B's very logical, rational arguments against another baby was "Someone is missing from our family." And Campbell is exactly who was missing.
He is such a sunny littly guy, tagging along behind his big sisters. He loves sitting at the kitchen table with them for afternoon snack. He'll join in the conversation, jabbering at them like he is telling them all about his day. And when the girls start laughing about something, Campbell will look at them for a moment and then start laughing too. He has no idea what's so funny, but if they're laughing, it must be funny.
When Campbell gets his hands on some new toy, or something he's not supposed to have, he'll sit on the floor and spin in circles, like he's on a sit'n'spin, jabbering. It's hysterical to see. He also loves to throw his toys as he noodles around the house, but he usually throws them behind him, and then looks extremely puzzled at their disappearance.
His greatest heartbreak is when Ella and Lily lock him out of their bedroom. If he manages to get in there with him, Ella will pick him up and plop him in the hallway and close the door. Campbell will crawl over to their door and bang on it while yelling. He got even with them last week by shredding some artwork Ella had hung on the outside of her bedroom door.
Campbell keeps getting more fun every day. I really feel like I've been able to enjoy his babyhood more than I did the girls'. With Ella I was so panicked all the time about balancing work and her, and I didn't have any clue what I was doing with her. I was such a nervous wreck that I missed the fun of her baby days. When Lily was a baby I was so busy chasing Ella, who was 2 and a handful, that Lily spent most of her time in the bouncy seat watching all the commotion. But with Campbell, I've been much more relaxed and have worried so much less about everything. And with the girls away every morning, I've had the time to just sit on the floor and play with him. Those mornings have been so special.
So now I'm weaning him, slowly. It's harder this time than it was with the girls, just because I know it's my last time. Also, he's never taken to bottles, so it's harder to get him to accept cups of milk before nap and bed, but I'm working on it. I'm going out of town the first week of October, and that will be Campbell's cut-off date. In the meantime, I'm savoring those last few early morning and evening snuggles with him.

Happy Birthday baby boy! We love you so much.
Posted by hokgardner at 7:57 AM

OMG --- How adorable is HE?! I would eat him right up. I am absolutely sure he's a good one - not at all like mine, don't worry! Thanks for coming by - I love meeting new people and finding new blogs to read! The sock knitting post below was cracking me up - turning a heel over the phone (your mom must be very good at explaining things, or you must be a genious - that is tricky, indeed!)

Dare you to nurse him in Westlake!