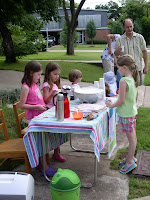 On the 4th, Ella and Luke came up with this plan to have a lemonade stand. On Thursday, it changed from a lemonade stand to a restaurant with daily specials. Ella was drawing up menus with lots of items listed. At one point, she came in to raid the refrigerator for food to sell on the corner. I talked her and Luke into waiting until today when we could do it right and offered to help her make cupcakes to sell.

We made cupcakes last night, and I let Ella do most of the work, including frosting them. I think I managed to keep her and Lily from licking them too much. Of course, the first question out of her mouth when she woke up this morning was when were we going to set up the stand. She and Brandon spent the morning printing up flyers that I helped her and her friend Jacqueline deliver to a few chosen neighbors.

Once we got the stand set up, I was concerned that no one would show up. Turns out I needn't have worried. The neighbors we invited all came and bought stuff. The guy mowing the lawn across the street paid $5 for two cups of lemonade. Lily spent pretty much everything in her piggy bank on cupcakes drinks. Our wonderful mailman bought a cup and left a tip. Aunt Ali and puppy Enzo came by and bought a cup or two. Strangers passing by on bikes stopped in for a drink. It was great to see everyone come out and visit. In the end, the kids made $46! When Ella and Luke told me that, I was sure they had made a mistake in counting, but they both said that Lisa had double checked their figures. They've already divied up the money. But Brandon is talking about having them pay parents back for supplies and marketing and graphic design services.

There were a few hiccups. Lily had a meltdown because she wanted her own lemonade stand. But I pacified her by letting her use my camera to take pictures - and she got a lot of cute ones. It also got really, really hot. The cupcakes melted by the end of the day, and Russell and I got sunburned sitting out there chaperoning.

It was a great experience for the kids, and I know we'll get hectored into doing it again, and that's just fine. It's one of those childhood memories they'll look back on fondly, at least they better!
Posted by hokgardner at 8:03 PM

"a restaurant with daily specials" - HILARIOUS!!!

It sounds like everyone had a lot of fun preparing for and running the lemonade stand. You're right - you can never ever move out of your neighborhood.

When I was little, I would write up menus for breakfast-in-bed on Mother's Day and Father's Day. Of course, I didn't know how to make anything, so I just listed all the cereals we had in the house and oj/milk/Pepsi/coffee. :)