"Isn't this the best day EVER?" 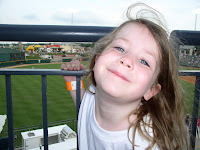 That's what Lily asked me while we were in the bathroom at the Dell Diamond on Sunday for our very first Express game. Actually, it had been a pretty lousy day for me. I hadn't slept well the night before, I was fending off my third migraine in as many days, and I hadn't gotten a lick of work done. I had sucked it up big time and gone to the game in the spirit of family time, and I ended up having a good time despite everything.

But that's not the point.

The point is Lily's enthusiasm. Any fun activity, such as going to the pool, or exciting event, like a baseball game, and she's likely to give us a hug and proclaim the day just the best ever. It's one of the things I absolutely love about her. Everthing is an adventure; everything is interesting.

The eight-minute trip to school in the morning is usually an eight-minute stream of consciousness narration about everything she sees - Look mom, it's the sign that changes. Look, they have monkeys painted on the wall. Look, there's someone riding a bike. I wonder where he's going on his bike. Do you know?

There is a flip side to this enthusiasm, though. As dramatic as Ella can be when things are wrong, Lily is ten times more so. She can and will burst into tears on cue about the slightest things, even things that seem so minor to me. Up until a few months ago, I thought she was really upset and would rush to soothe her and make her feel better. But I've slowly come to realize it's all an act. If I ignore the tears or offer a distraction, she stops crying like a switch has been flipped. Usually, there aren't even any real tears; she's quite the little actor.

Lily even fooled my mom on her last visit. Mom had taken the girls to Terra Toys - one of three stores she knows how to get to - and said each could pick out two things. Well Lily of course found three things, one of which was a Hello Kitty luggage tag. Mom told her that she had to put one thing back, and Lily burst into tear, sobbing that she really wanted to get the luggage tag for me because I'd love it. Of course, mom caved as any good grandmother would, and Lily turned off the waterworks instantly. And she never gave me the luggage tag. Lily said she'd hold onto it for me by putting it on her new lunchbox.

When mom came back with the girls and told me about the scene, I just had to laugh. I'd been conned the same way too many times to count.

As I've started ignoring the crying fits, they've decreased in frequency and intensity. But I realized the other day that they go hand-in-hand with Lily's enthusiasm about life. Everything is very dramatic to her - both good and bad - and I don't want her to lose the talent for drama. Tearful scenes aside, her enthusiasm is part of what makes her so wonderful. She reminds me on a regular basis, without knowing it, took look for the wonder and joy around us - even when we're in a bathroom at a baseball stadium.
Posted by hokgardner at 8:34 PM

Lily and Jane are very similar. When Jane plays by herself, it often sounds like six kids in her room. I will never forget her reaction to tray tables when we flew on vacation. She was SO IMPRESSED. She makes me appreciate the world all over again through her enthusiastic prism.

But WOW, the sheer VOLUME. The DRAMA. The sheer urge to fall on the floor and strike myself until she finishes...