The Doll in the Wheelchair

Last fall, when Christmas catalogs started arriving, Lily got one from the American Girl Doll company. Featured in it was a wheelchair for the dolls. Given that she already had the set with crutches and a cast for her doll, Lily squealed at the thought of having a wheelchair for Ginny. (This whole thing started the now-famous Anne of Green Gables literary smackdown between me and my sister.)

My sister gave Lily the wheelchair for Christmas, and she was beyond thrilled. 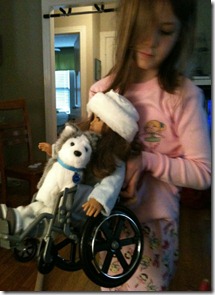 When Liz from Peace, Love & Guacamole showed this picture to her husband, his comment was that at the rate Lily is going, Ginny’s dog would have a seeing-eye dog harness strapped on her soon.

Little did I know that having Ginny in a wheelchair would come in handy.

On Monday I took Elizabeth to the doctor because she was coughing and wheezing. The doc diagnosed her with RSV and prescribed nebulizer treatments. The first few treatments went just fine because Elizabeth felt too miserable to protest. But now that she’s feeling better, it’s getting harder and harder to get her to sit still.

That’s when B came up with a brilliant idea. He had Lily go get Ginny in her wheelchair, and I held the mask in front of the doll’s face for a few seconds before putting it in front of Elizabeth’s. It worked like a charm.

Now we start each treatment session by giving Ginny some breathing medicine. If Lily is home, she even makes breathing sounds for the doll. Elizabeth loves it.

Posted by hokgardner at 8:51 AM

I have the most interesting grandchildren!

Clever. Don't you love that too-sick-compliance, though? I mean, not in a way that you want your kids to be that sick, but less battle is good, too.

I was about to say that disability dolls sounded a bit spooky but hey, if it helped,In guess not

Genius! It will be interesting to see if there is a medical or rehab career in Elizabeth's future.

I hope she is doing much better.