OK, not really, but I did see him in the lobby of the Four Seasons as I was on my way to the PBSKids brunch.

Last year, I was invited to brunch with the PBSKids crew, and it was less than impressive. So when I received an invite to this year’s event, I wavered on whether to accept. Finally, the thought of spending a few hours with grown-ups at the Four Seasons, which is lovely, won out.

Yesterday morning I put on my best skinny jeans and cool top and headed downtown. I left the house early and spent a while just noodling around, people watching. South by Southwest (SXSW or South by, for short) is a HUGE event here each March. It draws tens of thousands during its two-week run, everyone from celebrities – Jake Gyllenhal, PeeWee Herman, Rene Zellweger, and my new BFF Conan, just to name a few – to bands, filmmakers and tech insiders. I have no real desire to fight the crowds and attend SXSW proper, so getting invited to an event like this brunch is great. I can experience a little bit of the fun without having to shell out for a wristband or have anxiety attacks.

This year’s brunch was world’s better than last year. A lot more people were in attendance, and the PBSKids crew gave an excellent presentation on their programs and how their online stuff ties in. The presenters talked about the research they do on how kids learn at different ages and whether the games online appeal to kids AND teach them at the same time. The data they’ve gathered are pretty impressive. They also gave us previews of upcoming web-only programs that look totally awesome. One, called “CHUCK VANDERCHUCK’S something something EXPLOSION” looks like it’s going to be a great show. All in all, I feel a lot better about letting my kids watch PBSKids shows and play on their site, and I’ll be downloading some of their game aps for the kids.

Wendi, Bejewell and I sat at a table with Linda Simenski, who is the VP of programming for PBSKids, and I totally geeked out while talking to her. She used to work at Cartoon Network and NickToons and was responsible for some of my favorite shows – namely “Rocko’s Modern Life” and “The Rugrats.” She also knows Dan Povenmire and Jeff “Swampy” Marsh, who worked on “Rocko’s” and who created my current favorite kids’ show, “Phineas and Ferb.” In her time at PBSKids, she has shepherded great shows like “Dinosaur Train,” “Word Girl,” and “The Wild Kratts.” When I told her that the first time Ella saw “Dinosaur Train” she said, “Dinosaurs and trains – I’m surprised no one thought of that before,” Linda laughed. She said that was the exact pitch the creator of the show used at PBS.

In addition to the time spent talking to the PBSKids folks, I did some great networking. I’m very proud of how I did at the event. Normally, walking into a room full of strangers is enough to cause a panic attack, but I just made up my mind to act like a big, important blogger, not the 30 hits a day blogger than I really am. When I arrived, I saw down in the first empty seat I found and immediately introduced myself to everyone sitting there and handed them all my card. In fact, I handed just about everyone I talked to my card. When I told B about it, he was so proud he almost cried.

As a result of my bravery, I met some cool Austin bloggers like Gigi of KludgyMom, Catherine of LiveMom, Cristina of The Ramblings of a Closet Writer, and Carol from GrowingUpAustin. I know I’m leaving out some women, but I didn’t get their cards, and my memory for names is shaky on a good day.

All in all, it was an excellent event, and I look forward to next year’s. Plus, they gave out what are quite possibly the best swag bags EVER. 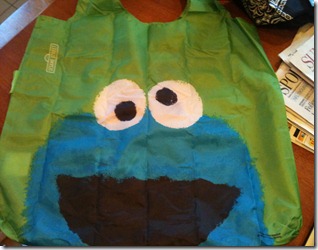 The kids are trying to claim Cookie, but he’s mine ALL MINE.

Posted by hokgardner at 9:30 AM

Sounds like a great event. Good for you, Heather!

It wouldn't be SXSW without a great celeb sighting. Conan would be at the top of my list. Sounds like a ton of fun to me. PBS programming is such a relief. It is so reliable in quality and fun. We watched Dinosaur Train this morning. And Phineas & Ferb = brilliant.

Sounds like exciting times in Austin. My friend at SXSW has bought no fewer than 19 T shirts and is in geeky heaven. Love the bag. You have cards? Must get onto that.

You looked fab-ooo in your skinny jeans and top. I was all brunchy and lame.

Sounds like fun. I would never miss the opportunity to get out and about when my kids were young. I am now out of the loop with children's programming, but I remember the days when my husband and I would watch Rugrats with the kids, how interesting to meet the people who do the programming.

Hi, so great to see you on Sunday. Thanks for coming to the brunch and glad you enjoyed it. See you again next year... if not sooner.

All the best,
Jeannine

And as a bonus you got to add some extra confusion to the life of famed dc artist Chris Bishop. Gotta keep those guys on their toes :-)

It was nice meeting you! Hopefully we will see each other around at more events in the future.