Yesterday I realized that it’s been a while since I’ve posted anything about Ella’s climbing. I guess I’ve been distracted by broken teeth, dental surgery, Campbell’s exploits, and our odd use of Lily’s doll.

B took both of the big girls to Boulder a few weeks ago for Ella to climb at Nationals. She climbed like a rock star the first day, placing 9th and qualifying for semi-finals. The second day didn’t go as well, and she ended up 15th overall in her division. Regardless of how she placed, we’re proud of her climbing and thrilled as can be that she has found a sport she loved so much.

Because Ella didn’t go through to finals, B and the girls had all day Sunday to play. He found a nearby ski resort that had a tubing run set up, and they set off for a grand adventure. 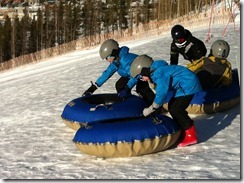 Ella and Lily spent hours sliding down the hill. They figured out that they would go faster if they linked their tubes together, which was a good incentive to get along with each other. 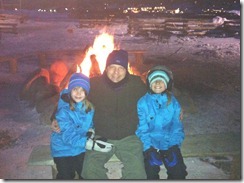 The place had a big fire at the bottom of the hill, which is where B spent most of the time. The girls would slide until they got cold, sit by the fire until they warmed up, and then head off for more sliding. B mostly froze. 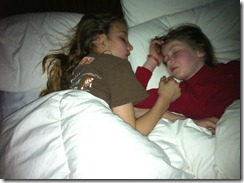 B said they passed out asleep as soon as their heads hit the pillows.

We’ve now moved on to sport climbing season, which means Ella is climbing in a harness on belay. This weekend was the first comp of the season, so Ella and I headed to Grapevine, just outside of Dallas, Friday night.

The comp was a good one – about 150 kids from Oklahoma and Texas competed. Ella flashed her four routes, which means she finished each route without falling. One other girl did the same, so they ended up in a climb-off. In the words of one of the team parents, Ella “boofed” her climb. She got her hands tangled on a hold and fell off about halfway up. The other girl climbed higher, so she placed first and Ella got second. The comp also had a speed climbing event, and Ella placed second, behind the same girl. Best of all, Ella and the other girl hit it off and spent the rest of the day playing with each other, talking a mile a minute the whole time.

When Ella first started climbing, she never talked to anyone – not her teammates, not her coaches, not her competitors. Now, she runs off as soon as we arrive, looking for her climbing buddies from other teams. And she willingly talks to her coaches about her climbs and what she needs to do. It makes me so happy to see how she has blossomed in the past year. Even if she never placed at another event, climbing will have been worth it for the self confidence Ella has gained from it.

I forgot to take my camera to the comp, but I did manage to get one video of a climb. It was her first of the day, and the easiest of the bunch. But it still gives you a good idea of what she's doing.
Her next comp will be in Houston at the end of the month.
Posted by hokgardner at 8:20 AM

There is so much to say about this post.

How you've blessed her with a source of esteem, how she has a group of people outside of school, how her world has become bigger now, and with more of a safety net, how she has a place that's all her own that she is GOOD at.

Such a gift you've given her. Forever.

Good luck in Houston, Ella! And I love how your name sounds when your mom says it.

It's a perfect name for cheering on. "GO, Ella!"

I love this. It's amazing what being good at something can do for a child's confidence and happiness. I'll be cheering for her as the season starts.

You live in Colorado? It must be beautiful.

Aww love the shot of knackered kids. Good luck to her, she works hard at her craft (ha and you too ferrying her around the place.)

Congrats to Ella! That is awesome. i'd be too chicken to try it.

What wonderful things sports do for our kids - something girls didn't hve access to when I was growing up. As parents it is a lot of work, time and money spent to help them participate, but so valuable.