I've been on a knitting tear lately and finally have something to show for all my work.

First, I finally finished B's socks. I knit him a pair a year and a half ago, but they felted when they got thrown in the wash accidentally. Ever since then, he's been begging me to knit another pair. I cast these on in January and just finished them this week. I don't know why they took so long. The wool is Arucania, and it's soft and lovely to work with, but knitting row after row of grey got tiresome. But now they're done, and I'm on to other things. 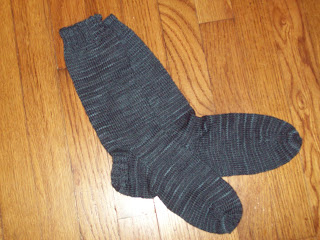 I knit this hat, modeled by Elizabeth, for Ella's rock climbing coach, whose wife had a baby girl TWO MONTHS ago. It's basic cascade 220 in a k5p5 traveling stitch, 90 stitches on size 5 dpns. This hat went really quickly; I cast on Saturday and finished it Wednesday. There was something soothing about the knitting and purling. I'm about to cast on another for a friend who's having a girl this summer. 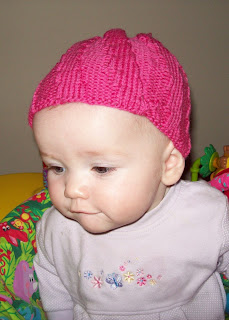 Today I'm going to place an order with KnitPicks for yarn to knit a tea cozy for a friend, and I'll probably cast on a pair of socks out of the MiniMochi I bought when my mom was here in February. So many things to knit, so little time.

The Evil Bunny is still in a heap in the corner, though.

Oh, what a precious hat! Or maybe it's Elizabeth that's wearing it.

If you have a pattern/plan, could you email me? I'm looking for a quick knit for my new nephew, and I'm thinking some summer cotton hats might be perfect.

i was about to say the same thing as Knittergan

I really must learn to knit socks because our winter's on the way and I have holes in the alpaca socks my daughter bought back from Peru for me . . .hmmm...

i'm so impressed with the socks--they really intimidated me. But I'm determined to knit a pair this year. Thanks for the hat pattern--my sister-in-law is expecting in October!

My goodness, look at that doll modeling the adorable hat! Ca-yoot!

Okay, I backed up and read the penis blog post. Oh. My. Goodness. My son is six and I plan to keep him in his bed the entire summer. I'm so sorry. Then, you had the baby with you and the urologist was blunt and off his own meds. My goodness!