On my flight to DC earlier this month, I cast on a new sock, part of a pair for B, who has been begging me for hand-knit socks for almost as long as we've been married. And following the Yarn Harlot's example, I took pictures of the traveling sock during my trip.

Here it is on Amtrak, going from the Baltimore Airport to Union Station in DC. 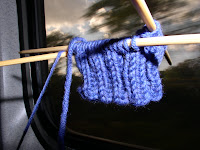 And here it is in back of the White House. I shook my fist at the current occupant, but not in view of the police officer on the horse, who is behind the sock. 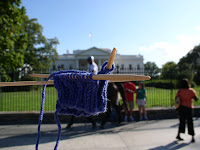 Here's the sock by the Cascade outside the National Gallery, where mom, our friend Jean and I saw the Hopper and Turner exhibits. I was far more impressed with Hopper that I was with Turner. I had no idea Hopper painted so many architectural pieces. I had associated him only with the city scapes that are his best known pieces. 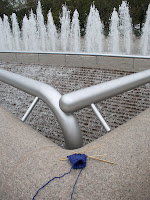 Here's the sock on the deck at Jean's house, overlooking the Potomac River. This is where I sat to knit most days. It's the most peaceful place you could imagine. At one point, I felt like I was being watched, and I turned around to see two deer studying me. 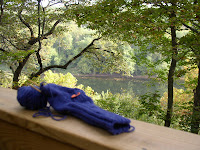 And the end result - a pair of merino socks for B, who is thrilled with them.

Posted by hokgardner at 1:26 PM

How do you people finish socks so fast?

How cool is that! I love the travelling sock story.

And to suburban correspondent: Obviously, socks are finished Jean's house. Didn't you see how much it had grown at that point?!

Well done. I could never, ever do the same :)

One sock was 4/5ths finished at Jean's house. The other was finished after I returned. And they were knit on size four needles with merino dk yarn, which makes for very fast knitting.