David and the Mega-Church 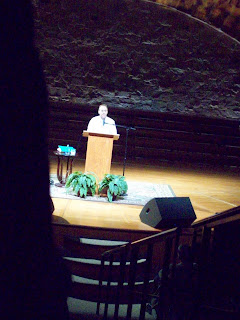 See the blurry figure? That's David Sedaris giving a reading last week. My divine neighbor L got tickets and took me as her plus one. I've seen Sedaris read at least half a dozen times, but this was L's first time, and she wasn't disappointed.

With the exception of a piece that was in The New Yorker a few weeks ago - "Author, Author?" - everything he read was new material, at least for me, which was great. I was a bit worried he'd read from his newest book, When You Are Engulfed in Flames, which isn't my favorite of his works.

Much of what he read was made even funnier by the location. He gave the reading at Riverbend Church, one of Austin's biggest mega-churches. It's on a large "campus" west of town, and it has a coffee shop, book store, meeting facilities, a separate chapel (where Jessica Simpson got married), and a "healing garden." The main sanctuary, where the reading was, has theater-quality sound and lighting systems. It's a fairly liberal church, for being Southern Baptist, but I'm betting there were a fair number of church members who were not so pleased that an openly gay man was allowed to give a reading there. And even though it's fairly liberal, I still got the creepy crawlies being in there, especially after I heard church ushers inviting people to join them for services on Sunday.

The president of the Paramount Theater, the organization that sponsored the reading, came out on stage to introduce Sedaris and compared himself to the king's official food taster. He figured that if he didn't get struck by lightning being there, Sedaris would be safe. I think that since the church didn't burn to the ground with us in it, god has a pretty decent sense of humor.

I also got a case of the giggles when L leaned over and told me to take a close look at the podium and ferns on the stage and how they were set up. Go back to the picture and take a good look, I'll wait. It's a rather phallus-like arrangement, don't you think? I wonder who was responsible for it.

Despite the church's "liberal" leanings, I'm still betting it's the only time someone has talked about condom shopping with his brother-in-law and said "thank fucking god" on stage there.

And I'm guessing it will be the last time.
Posted by hokgardner at 9:27 AM

He is a funny, funny man. And you've seen him half a dozen times! Lucky you!

That is hilarious! I am truly surprised Riverbend hosted that. I'm sure some of their members were completely appalled.

oh seriously? wish I had seen it

he's here tonight- tickets were not to be had. i'm jealous. i need to sign up for some sort of list that gives me advance warning when he goes on sale, so i find out in time.

i can't believe he talked at the church--that definitely adds a little something to the performance! :)