See this boy? With his curly hair, blue eyes and dimples? See him? 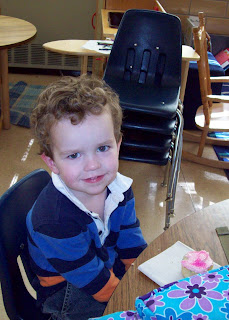 I sent him off to preschool yesterday morning for the first time in almost two weeks; bouts of pink eye that turned out not to be pink eye and the penis incident had prevented his going to school lately. I turned to B and we smiled at the silence in the house. I managed to get two solid hours of work done while Elizabeth napped. It was a very good morning.

And then the phone rang.

It was Campbell's preschool director calling to tell me that Campbell had fallen and bitten his tongue really badly and that I needed to come get him. All I could say was, "Well, of course he did." When I got to preschool, Campbell was back in his classroom crying and trying to eat his lunch. Applesauce was the only thing that didn't hurt his tongue when he ate. His teacher had him stick out his tongue to show me the cut, and I gagged when I saw it.

I put in a call to our pediatrician, but the office was closed for lunch, so I had the answering service page the doctor. He called back and had me bring Campbell in right away. Fortunately, it's a clean cut, no jagged edges, and while it is pretty wide, it doesn't go all the way through his tongue, so no stitches are needed. Campbell gets to take another round of antibiotics and eat ice cream for a few days. He's completely digging the ice cream part, but he screams every time I come near him with anything that looks like medicine.

It's funny - when Ella was little, we joked about how we would need a frequent flier card at the ER for her given her climbing escapades. She's never been to the ER (knock on wood, turn around three times and spit), but Lily's been once, and Campbell has been three times.

I think for my own sanity, though, I'm going to make Campbell wear a helmet, pads, mouth guard and cup any time he's up and around. It just seems safer.

Posted by hokgardner at 9:54 AM

Campbell! What are we going to do with you?

seriously, what the heck is it with boys and danger/injury???

here's an idea: mix the medicine into the ice cream

I put his antibiotics into his chocolate milk this morning, but he could tell something wasn't right and refused to drink it. Sigh.

Poor little tot. Hopefully he's had his 3 disasters and it'll all be smooth sailing from now on!

Whew. Glad no stitches in the tongue, but that is still a horrid thing to have happen. Hope the ice cream is speeding his recovery.

poor thing!! all those ER visits would be the death of me, that's for sure!

Oy, some kids are like that. My sister calls them "danger rangers". My youngest lives on the edge, but he's been pretty durable so far (knock on wood!). Only 1 ER vist. And one for my daughter, which left her the most interesting kink in her eyebrow - how's that for lucky on a facial injury! (The scar is in the eyebrow and you'd never notice it if you didn't know.)

But yes, we've joked about frequent flier cards and dr. offices too...

all part of being a boy, I imagine. I'm clueless as I have two sisters no brothers and one daughter and that is it