This is all my mother's fault. She started it. She knit this bunny for Elizabeth, and it was just so cute I had to give it a try. I will admit that she warned me that the bunny was evil. But when she sent the bunny to Elizabeth, she sent me corrected instructions and some fun fur nylon yarn with which to make one. I figured I'd knock one out over the weekend and hand it off to Ella's rock climbing coach, whose wife had a baby TWO months ago, when Ella went to practice on Tuesday.

Things went just swimmingly through the body and the arms, although I did feel as though I was wrestling with the yarn, which has NO give to it at all. But when I got to knitting the head, the EVILNESS kicked in.


I followed mom's modified instructions, which she lifted from some other knitter, and had about 8 rows of the double knitting done when I realized that I had dropped a stitch somewhere. Because the yarn is so fuzzy, I couldn't find the error, so I had to rip back to the neck. I was sitting in the waiting area at Lily's ballet class when this happened, so I couldn't swear openly. Instead, I was reduced to muttering words about evilness and bunnies and evilness.


But I pulled myself together and started the head again. I had about half the head done when my mom called. I asked her if the head was supposed to be so narrow or whether it stretched out when it got stuffed. That's when she asked if I had forgotten to double the stitches after reducing them for the shape of the neck. I read through mom's instructions, and there was no mention of doubling stitches. Turns out she forgot to include that row when she retyped them.


I had initially said I'd put the bunny in time out and knit on a hat I started this weekend, but then I decided I couldn't let knitting something like a cute little (evil) bunny defeat me. So I attempted to rip back the head again. Turns out, you can only rip back fun fur once before it becomes so fuzzy that you lose all home of being able to see individual stitches. 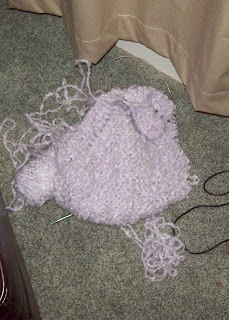 The evil bunny is now in a heap in the corner of my room, behind the reading chair. It may sit there for a long time before I throw out the body and donate the remaining yarn to the girls' craft box. I'm never knitting one of these bunnies again.

Posted by hokgardner at 9:57 PM

it's not the bunny, it's the yarn that evil. :) I tried to knit a bear once, and it looked like nothing like the picture--I've yet to try to knit a stuffed animal.

Ooos. I would say it was completely my fault for messing up the directions, but I really think that the bunny controls all knitted-bunny activity and he messed up my directions. Honestly, the thing is pure evil.

ah, the eeeevil is just waiting there, festering and multiplying!!!!!

I was thinking of knitting that bunny for my new nephew, but maybe not...

If you do want an easy(ish) stuffed animal, I would recommend Sheldon (knitty.com). If you are comfortable with double pointed needles, and can increase (kfb, pfb) and decrease (k2tog and ssk), he's not hard. The shell that looks like intimidating hexes? Just slip that light green stich for 6 rows, and it pulls it into that hex shape. Way cool!