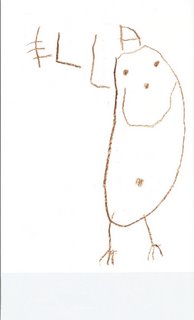 First, here's a picture Lily drew of Ella. I think it's wonderfully silly.

I write a lot about Ella, but not as much about Lily. I'm just not even sure where to start with her. When she was little, we called Lily the "angel baby" because she was so sweet and even tempered. About six months ago the angel baby disappeared. It now seems that she spent the first three years of her life watching Ella and figuring out how to drive her insane. She can get Ella going so fast it's amazing. Lily can whistle, but Ella can't, which frustrates Ella to no end. So Lily will sit at the kitchen table with Ella and just start whistling. Ella will put up with it for a few minutes before getting upset that Lily is showing off by doing something she can't. Lily will also sing songs that she knows Ella doesn't like just to get her riled up. And it doesn't matter how much we tell Ella to ignore her sister, she still lets Lily get to her.

My mom calls Lily the "stealth child" because she looks so sweet, even while doing something she knows she souldn't be. She has those big blue eyes and the little rosebud mouth. She'll give you the biggest smile in the world while swiping the cookie out of your hand. After one particular incident, mom said that she never would have believed Lily capable of such a thing if she hadn't been there to witness it. I realized recently that I've let Lily get away with a lot because a. she's been the baby of the family for so long, and b. because she just looks too sweet to do anything mischievious. We're having battles these days as we sort things out and work on changing some of her little habits - like spitting at her sister when she's mad.

We've always said that Ella is a born negotiator. When we tell her she can't do something, she'll immediately say, "How about we do xyz instead?" I spend a lot of time just saying no over and over. Lily is the very opposite. I'll tell her she needs to do something, and she'll just tell me no. So then I end up saying, "How about doing xyz instead?" to which she just says no. These days, she's changed her flat no to "I don't feeeeelll like it."

Despite her "stealth child" behavior, Lily is really a very sweet, funny little girl. She loves giving hugs and kisses, especially to her brother. And I can tell she's just as sharp as her sister. She's so interested in Ella's being able to read that I have a feeling she'll be reading early. I often find her just sitting on her bed looking at books and narrating them to her critters.

She's also been my little grocery store buddy for the past two years. I'd save grocery store trips for the days when Ella was in preschool so I only had to drag one child with me. Even when Lily started preschool, I'd still take her with me on her off days. We'd sing songs as we shopped and talk about what to buy. I miss having her with me now that she's in preschool five mornings a week. Campbell's cute, but he's not much of a conversationalist.

It's so much fun watching both of my girls grow up and seeing their little personalities develop. It amazes me that two children with the same parents can be so different.
Posted by hokgardner at 11:12 AM

Despite any drama or bad things Lilly and the Stealth Angel do, they are both great individuals with wonderful personalities. Credit the parents.